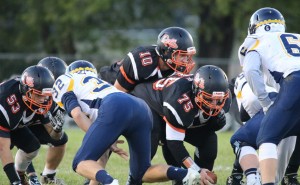 The Tea Area Titans racked up 36 points in the second half on their way to a 56-6 win over the Dell Rapids Quarries on Friday, September 28th in Dell Rapids.  Tea out gained Dell Rapids 389 yards to 180 yards and forced the Quarriers into four turnovers.

The Titans scored first after a Dell Rapids interception in the first quarter.  With 7:11 to go, Wyatt Van Tol scored on a 20-yard run.  After the extra point, Tea led 7-0.  The scored remained 7-0 after the first quarter.  Tea scored again early in the second quarter.  Carter Slykhuis scored on a 74-yard run with 11:02 to go.  The extra point gave the Titans a 14-0 lead.  Dell Rapids cut into that lead with 9:22 to play in the half.  Eddie Price connected with Logan Ellingson on a 78-yard touchdown pass to make the score 14-6.  After another Dell Rapids interception, the Titans scored right before halftime.  With 1:14 to play, Luke Elkins scored on a one-yard run.  Tea led 20-6 at halftime.

Tea’s offense really got rolling in the third quarter.  Slykhuis had two touchdown runs with four and a half minutes of each other, and the Titan defense recorded a safety in between the touchdowns.  With 4:27 to play in the third quarter, Dell Rapids quickly found themselves trailing 36-6.  Elkins scored his second touchdown of the game with 1:33 to play in the quarter on an 11-yard run to give the Titans a 42-6 lead.  Tea added two more touchdowns in the fourth quarter on runs by Kaden Johnson and Garrett Kolbeck.

Dell Rapids ended with 101 passing yards and 79 rushing yards in the game.  They were 4-10 on third down and had four penalties for a total of 55 yards.

Price finished the game 3-13 passing for 101 yards, one touchdown, and three interceptions.  Ellingson had one catch for 78 yards and a touchdown.  Nick Boever had two catches for 23 yards.  Logan Stone finished the game with four carries for 42 yards.  Price had six rushes for 20 yards.  Boever carried the ball nine times for 12 yards.    Coby Maeschen and Price both had seven tackles in the game.  Tayte Gleason ended with six tackles.  Kenyon Shellum had five tackles, including a sack and forced fumble.  Alex Kringen also had five tackles.

Dell Rapids (3-3) will travel to Milbank on Friday, October 5th.  The game can be seen on Big Sioux Media.