Dell Rapids PBR missed qualifying for the state tournament after dropping their final two games of the District 4B tournament in Dell Rapids.  PBR fell to Lennox 14-1 on Friday, July 29th and then loss to the Salem Cubs in the “Last Chance” game on Saturday, July 30th.

Salem built a 7-0 lead in the first six innings of play on Saturday.  Dell Rapids tried to put together a rally in the later innings.  Calhoon had an RBI fielder’s choice ground ball that scored Conner Spindler in the top of the seventh.  PBR added two more in the eighth.  Schlimgen had a two-run home run to center field, but PBR was unable to score again in the game.

Dell Rapids PBR is currently 1-1 in district play after two games and still has a shot at qualifying for the state tournament.  PBR won their District 4B opening round game on Friday, July 22nd, but lost their next game on Saturday, July 23rd at Rickeman Field.

Colman got one run back in the bottom of the sixth inning, and Dell Rapids led 5-3 after six innings of play.  Schlimgen started the top of seventh with a solo home run to center field to the PBR lead to 6-3.  Colman, however, scored two times in the bottom of the seventh and then one more in the eighth to tie the game 6-6.

PBR then broke the game open in the top of the ninth, scoring five times all with two outs.  Beau Behrend and Schlimgen both had a bases-loaded walk.  Trey Randel brought home the other three runs with a double.

The offense for PBR was held to just two hits against Lennox on Saturday, July 23rd.  Lennox scored in five of the seventh innings and got the win on the 10-run rule.

PBR will play against the Dell Rapids Mudcats on Thursday, July 28th at 6:00 p.m.  The winner will qualify for the state tournament.  The loser will have two more chances to win one game to qualify for state.

Dell Rapids PBR and the Dell Rapids Mudcats met in the final regular season game of the Cornbelt League this season on Sunday, July 17th, and the two teams did not disappoint.  Both teams held a lead in the game, but the Mudcats took the win 5-4.

Riley Calhoon scored for PBR in the first inning for a 1-0 lead.  Calhoon scored again in the third inning putting PBR ahead 2-0.  The scored stayed 2-0 until the sixth inning.  Dalton Lehnen hit a three-run home run also scoring Travis Peters and Kris Regas for a 3-2 lead.  Grant Olson and Peters scored in the bottom of the eighth to give the Mudcats a 5-2 lead.  Beau Behrend and Teagan Schlimgen drew back-to-back walks in the top of the ninth and also scored, but PBR’s rally fell short as the Mudcats hung on for a 5-4 win.

Calhoon and Conner Spindler both had three singles for PBR.  Weston Hanson finished with two singles, and Tim Wilhelmson had a single.  Lehnen had three hits for the Mudcats, two singles and an home run, with three RBIs.  Olson, Peters, and Dalton Allen all had two hits each.  Mark Abrahamsen and Regas both added a single. 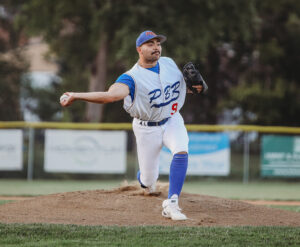 Colman scored four early runs and held on to a 4-3 win over Dell Rapids PBR at Rickeman Field on Thursday, July 14th.

Solberg had two hits, one a triple, and an RBI.  Randel also had two hits and an RBI.  Grant Sweeter added two singles.  Riley Hoffman, Tim Wilhelmsen, and Conner Spindler all had a single.  Behrend had an RBI.  Randel pitched five innings and allowed four runs, one earned, on five hits and three walks with eight strikeouts.  Behrend pitched four innings and allowed two hits and three walks with four strikeouts.

The Lennox Alpacas shut out Dell Rapids PBR 8-0 in a make-up game on Wednesday, July 13th at Rickeman Field.  The game was originally scheduled for July 5th.

Lennox scored in only two innings in the game.  They had a three-run third inning and a five-run fifth inning.  PBR was held to just three total hits in the game.

Weston Hanson had two of the three hits for PBR, one of those a double.  Riley Hoffman had the other hit.  Hoffman took the loss pitching five innings while allowing eight runs, only two earned, on nine hits and a walk with four strikeouts.  Grant Sweeter pitched two innings without allowing a hit.

Dell Rapids PBR finished a suspended game and then played a regularly scheduled game against the Humboldt/Hartford Gamecocks on Sunday, July 10th.  The resumed game was suspended from June 9th.  The Gamecocks won both games, taking the first one 8-4 and then the second 15-0.

In the opening game that was suspended in the sixth inning, PBR found themselves trailing 6-1.  The Gamecocks had a run in the first, two in the second, and single runs in third, fourth, and fifth innings.  PBR had a run in the bottom of the second.  Trey Randel had an RBI double.  Dell Rapids then scored a run in the bottom of the sixth to make the score 6-2.  Randel had another RBI, this time with a ground out.  Both teams scored two times in the eighth inning.  Teagan Schlimgen had a solo home run, and Tanner Solberg had an RBI sacrifice fly.

In the regularly scheduled game between the two teams, the Gamecocks scored in every inning and held PBR to just five hits total.  Humboldt/Hartford had two runs in the first, four in the second, one in the third, six in the fourth, and two in the fifth.  The Gamecocks had a total of 19 hits in the game.

Teagan Schlimgen had four hits, one a double, and two RBIs.  Hoffman had three hits and two RBIs.  Barr finished with two hits and an RBI.  Grant Sweeter added a hit and an RBI.  Calhoon had two hits. Tim Wilhelmsen and Beau Behrend both had a hit.  Randel pitched six innings and allowed 11 runs, only five earned, on 11 hits and three walks with four strikeouts.  Behrend pitched two innings and allowed three earned runs on three hits and four walks. 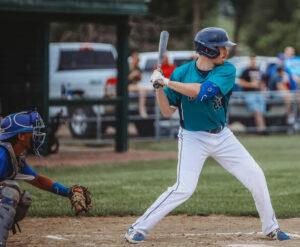 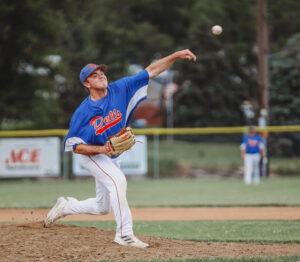 Dell Rapids PBR scored three times in the third inning and held on for a 3-1 win over the Crofton Blue Jays in the Cornbelt League / Sunshine League Showdown in Humboldt on Saturday, June 18th.

Riley Calhoon hit an RBI sacrifice fly for the first run of the game.  Trey Randel brought home two runs with a two-out single for a 3-1 lead.  Crofton, which was held to just one hit, scored on an error in the top of the fourth inning.

Randel had a hit and two RBIs.  Calhoon had a hit and an RBI.  Grant Sweeter finished with a double.  Riley Hoffman and Tim Wilhelmsen both had a hit as well.  Beau Behrend pitched seven innings and allowed an unearned run on a hit and walk while striking out 10 batters.