Nashville recording artist Hailey Steele spent the day in Dell Rapids on Wednesday, September 12th.  Steele was brought to Dell Rapids by the Dell Rapids Connections group.  Steele spent time during the day at the schools talking with students about treating others with kindness, believing in your dreams and working hard at them.

Steele then preformed an evening concert at the Dell Rapids City Park later in the evening.  The Connections group provided a meal for the community at 6:00 p.m. with the concert starting about 6:30 p.m.  Hundreds of people of all ages gathered at the park for a great evening of food and music. 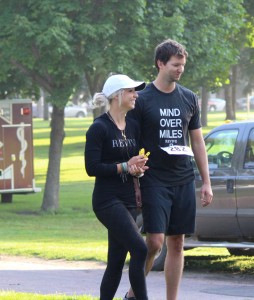 On a beautiful Saturday morning at the Dell Rapids City Park, Revive Fitness held their 4th Annual Revive & Connections Family Fun Event on August 25th.  The day was full of great weather and lots of fun.  The event consisted of a 5k, 10k, one mile fun run, kid’s relay, bounce houses, and more.  The Farmer’s Market also set up at the city park during the event.

Prior to the start of the races, Revive Fitness owner Brittani Bollock and her husband Lee were recognized for the work they do for this event.  They plan this event every year with all of the proceeds going to the Dell Rapids Connections group.  The money raised from this event help provide the Connections group with enough funds to plan different events through the year.  Some of the more recent events that have been held are a social media awareness event, Bobby Bugatti, and a mental health presentation.

The Dell Rapids Connections group continued work started by a Dell Rapids student early this year.  The group sponsored a mental health and suicide prevention presentation on Monday, November 20th.  The presentation included two speakers.  Angela Drake from Tea and Tod Lacey from Dell Rapids both spoke during the “Talk Saves Lives” presentation.  Both speakers are parents who have lost a child to suicide.

The Dell Rapids Connections group sponsored the event in an effort to continue the work started by Sydney LaCoursiere.  LaCoursiere put together an event in October during the Dell Rapids vs Flandreau football game.  A total of 112 luminary bags were placed around the football field and fans attending the game were given a flier that talked about mental heath issues.  Her desire to get awareness out to the public is due the number of suicides the Dell Rapids community has faced over the last 10 years.

Parents can find more information and resources at the American Foundation for Suicide Prevention website. 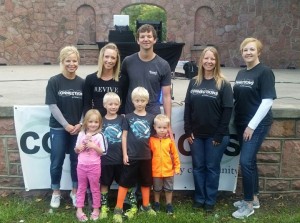 Brittani and Lee Bollock and Revive Fitness have outdone themselves with another generous donation to the Dell Rapids Connections group.  The Bollocks presented a check to the Connections group during the Bobby Bugattii Jones concert at City Park on Wednesday, September 14th.  The check donated to Connections was $6,000.  The funds donated were raised during the 2nd Annual Revive & Connections Family Fun Event that was held on Saturday, August 27th.  That event consisted of a 5k, 10k, one mile fun run, kids relay, raffles, bounce house, fire truck, ambulance, live music, games, and crafts.

With the generous donation, the Dell Rapids Connections group is looking at bringing in more events like the Bobby Jones event that was just held. 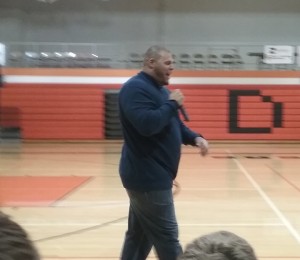 A native of Yankton, SD and former football player at Michigan State University, Jones shared his testimony to the students.  Jones fell into the world of alcohol addiction after falling short of his NFL dream.  In 2012 Jones found Christ after nine months in recovery and found a new purpose for his life.  Now 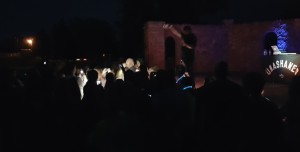 Jones is a speaker, singer, songwriter and performer.  He shares his story of faith to motivate youth to make right choices for their future. 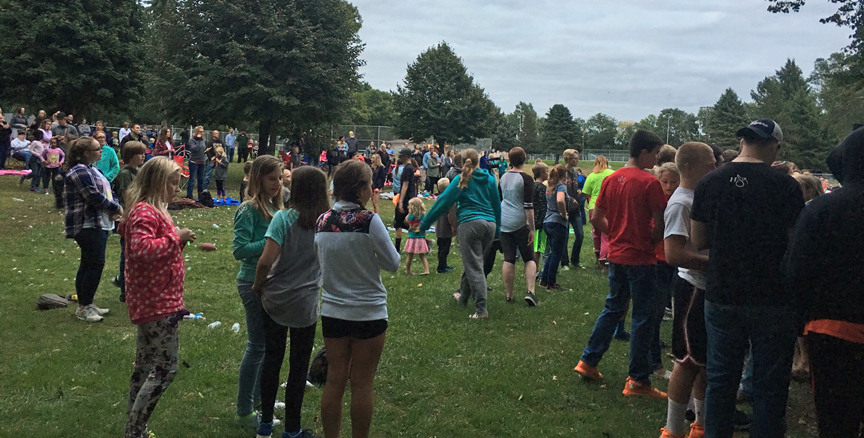 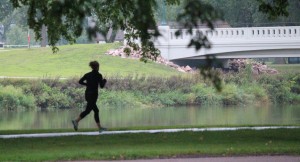 Revive Fitness owner Brittani Bollock said, “It had a great turnout, and I am so thankful for people who are so involved in the community and support so much!”

Bollock will donate all of the proceeds from the event to the Dell Rapids Connections group.

Bollock, her staff, and all the volunteers put on another great event for the community of Dell Rapids!!

The winners of the 10k and 5k divisions were: 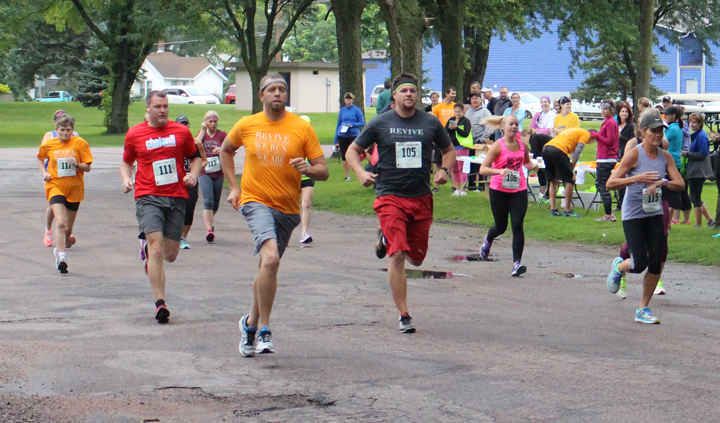 The Dell Rapids Connections group will be hosting a Social Media Night for parents in the Dell Rapids community on Tuesday, March 29.  The event will be held in the Dell Rapids Middle School commons starting at 6:30.  Included in the event will be a presentation by DCI Special Agent Troy Boone and Minnehaha County Detective Derek Kuchenreuther regarding social media use and abuse and what parents can do to keep their children safe in the cyber world.  This presentation will be followed by a panel discussion including representatives from Carroll Institute, The New Colossus, Minnehaha County Sheriff’s Department and local schools.

This event is free to the public and light refreshments will be served.  For more information, please contact DRMS counselor Kate Telkamp at kate.telkamp@k12.sd.us or by phone at 428-5473.

Revive Fitness presented the Dell Rapids Connections group with a $3,000 donation on Thursday, January 21st, during halftime of the Dell Rapids Quarriers vs Madison Bulldogs boys basketball game.  The money donated was raised as part of the Revive You 5k + Family Fun Run held on Saturday, September 19th.

“My goal is to raise awareness for a group of people who give back and help the whole community in not only day-to-day living, but are also a major role in crisis situations,” said owner of Revive Fitness Brittani Bollock. 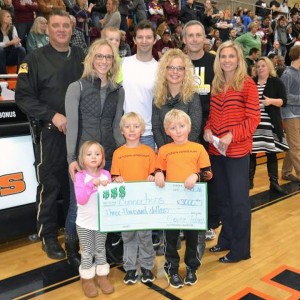 Bollock said that last fall when Revive Fitness was celebrating their one-year anniversary, they started searching for a local group to pay forward all the love and generosity that they have received from the community.

“As far as Revive and my family, we are, and continue to be, humbled and amazed by the support of our community and the surrounding area,” Bollock said.

When Connections came to mind, Bollock said that they didn’t have a second thought on where they were going to give back.  “Not only is the mission they stand for all we believe in, but the people who make up this group are second to none. They are also some of the first people in line to give of themselves and their time to better the lives of the community. When we opened Revive, our goal was to not only help better the lives of our members, but to give back and be involved in our community. Having grown up here and graduated from St. Mary’s, we feel a deep connection with the amazing people of the community and anytime there is an opportunity to give back, we do,” Bollock added.

Dell Rapids Connections will use the funds to help bring activities to Dell Rapids over the next year.

Dr Summer Schultz, superintendent of Dell Rapids High School, said, “We’ve had student groups attend our (Connections) meetings to let us know areas they think would be beneficial to bring in.  We are also lucky enough to have so many different specialties in our group that we get a feel for the information that parents and kids may find useful.  Some of the programming or resources we bring in are ‘uncomfortable’ topics or unknowns that parents, churches and school staff can benefit from learning about.”

Revive Fitness is hosting another event to help raise funds for Dell Rapids Connections.  They will be hosting a Revive Game On Challenge over the next eight weeks for members and anyone else in the community who would like to join.  Everyone who has placed a wager on themselves will either receive a wager back or Revive Fitness will donate the funds to Connections.  Anyone interested in joining the event or contributing to the organization can contact Bollock at 605-951-8540.

According to the National Highway Traffic Safety Administration (NHTSA), in 2013, 3,154 people were killed, and an estimated 424,000 people were injured in motor vehicle crashes involving a distracted driver.  Also according to the NHTSA, sending or receiving a text message takes a driver’s eyes from the road for an average of 4.6 seconds, the equivalent of driving the length of an entire football field blind at 55 mph.

Students and parents were able to sign pledges to never text and drive during the basketball double-header at Dell Rapids High School against Tea Area on Friday, December 18th.  Important information and statistics were also handed out at the ball games.

The full event can be seen in the archive video section on Big Sioux Media on the Webcasts page, or can be seen by clicking here.  The opening remarks for the event start at the 7:00 mark of the video.