Dell Rapids slowly pulled away from Volga for an 8-0 win in the opening round of the state tournament on Friday.  Talan Millage drove home the first run with an RBI ground out in the top of the second inning.  Mason Stubbe started the third with a triple and then scored on an RBI ground out by Tad Tjaden for a 2-0 lead.

Fersdahl had two hits for Dell Rapids.  Quinn Carr had a double, and Williams added a single.  Tjaden pitched 5 2/3 innings and allowed five runs, but only one earned, on five hits and two walks with 11 strikeouts.  Konrad Richeal pitched 1/3 of an inning and allowed a hit and a walk.

A big sixth inning for Dell Rapids helped them to an 11-2 win over West Central on Sunday to take third place in the state tournament.

Dell Rapids did score three times right away in the top of the first inning.  Frost had a two-run single, and Williams scored on a balk for an early 3-0 lead.  Millage added an RBI sacrifice fly in the top of the third to push the lead to 4-0.  West Central cut the lead in half, 4-2, with two runs in the bottom of the fourth inning.

The Dell Rapids 16U baseball team will enter the 2022 South Dakota VFW Class A 16U State Tournament as the runner-up team from Region 3A.  West Central defeated Dell Rapids 5-1 in the Region 3A Championship on Wednesday, July 27th.

Dell Rapids was held to just two hits in the game.  Williams and Quinn Carr each had a single.  Frost had the lone RBI.  Frost pitched six innings and allowed five runs, four earned, on 11 hits and one walk with three strikeouts.

Dell Rapids will play Volga on Friday, August 5th at 5:00 p.m. in the opening round of the state tournament.  The tournament is being hosted by Dakota Valley and held in North Sioux City.

The Dell Rapids 16U baseball team lost a tough, extra-inning game to West Central in the semifinals of the Region 3A tournament on Tuesday, July 25th.  They were able to rebound and get a win over Madison White immediately afterwards to put them into the championship game.

Madison scored three runs in the bottom of the first inning for a quick 3-0 lead, but Dell Rapids rebounded to score the next 11 and eventually won 14-4 in five innings to put them into the championship game for a rematch with West Central.

Dell Rapids never trailed in their 6-3 win over Madison White at the Region 3A tournament in Humboldt on Monday, July 25th.

Mason Stubbe had a two-out RBI single.  Lincoln Fersdahl was hit by a pitch with the bases loaded in the very next at bat.  Carr followed that with a bases-loaded walk, and Dell Rapids led 5-1.  Dell Rapids got an insurance run in the top of the seventh.  Stubbe drew a bases-loaded walk for a 6-1 advantage.  Madison got two runs in the bottom of the seventh, but the rally stopped there.

Stubbe had two hits and two RBIs.  Carr and Pickard both had a single and an RBI.  Tad Tjaden, Sutton Williams, and Talan Millage all each had a single.  Fersdahl added an RBI.  Tjaden pitched 5 1/3 innings and allowed one earned run on five hits and four walks with six strikeouts.  Fersdahl pitched 2/3 of an inning and struck out two batters.  Konrad Richeal pitched one inning and allowed two earned runs on two hits and three walks with one strikeout.

Dell Rapids will play West Central in the regional semifinal at 6:00 p.m. on Tuesday, July 26th.

Madison Gold scored all of their runs in the first two innings in a 6-2 win over Dell Rapids 16U on Thursday, July 21st.

Fersdahl had two hits and an RBI.  Tad Tjaden also had two hits, one a double.  Cooper Frost had a double.  Talan Millage added a single, and Williams finished with an RBI.  Williams pitched three innings and allowed six runs, four earned, on six hits and four walks with three strikeouts.  Frost pitched four innings without allowing a hit with two walks and five strikeouts.

Dell Rapids broke a tie in the top of the eighth inning and took a 7-6 road win over West Central on Monday, July 18th.

Pickard drew a lead-off walk to start the eighth.  He later stole second and then advanced to third on an error.  The aggressiveness worked as Zellmer drove home Pickard on an ground out for the winning run.

Fersdahl finished with two hits and an RBI.  Zellmer had a single and two RBIs.  Williams and Pickard both had a single and an RBI.  Grady Lamer finished with a hit.  Konrad Richeal pitched 5 innings and allowed four runs, all unearned, on four hits and two walks with five strikeouts.  Fersdahl pitched three innings and allowed two earned runs on two hits and eight walks with five strikeouts. 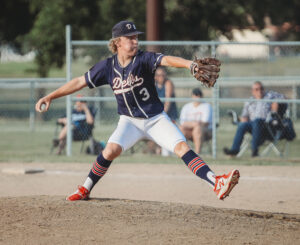 Dell Rapids 16U split a doubleheader with Volga at home on Thursday, July 14th.  Volga took the first game 11-7, but Dell Rapids won the second game 4-0.

Lamer had two hits and an RBI.  Quinn Carr also had two hits.  Millage finished with a double and three RBIs.  Williams also had a double with two RBIs.  Fersdahl finished with a single and RBI.  Cooper Frost and Luke Schoolmeester both had a single.  Carr pitched  3 1/3 innings and allowed nine earned runs on eight hits and six walks wiht six strikeouts.  Frost pitched 1 1/3 innings and allowed two unearned runs on four walks.  Millage pitched 1/3 of an inning.

Tjaden had a hit and two RBIs.  Frost and Millage both had a single and an RBI.  Williams, Ethan Kringen, and Lamer all had a single.  Millage pitched all five innings and allowed five hits and a walk with four strikeouts.

The Dell Rapids 16U baseball team made the long trek across the state to Spearfish and played four games between Friday, July 8th and Sunday, July 10th.  Dell Rapids finished the weekend 2-2.

Spearfish scored four times in the bottom of the third and earned a 4-3 win over Dell Rapids on Friday.

Dell Rapids only scored in three innings, but had an eight-run third, two-run fourth, and seven-run sixth in their 17-4 win over Post 320 on Saturday.  Post 320 had a run in the third, two in the fourth, and one in the fifth.  Dell Rapids never trailed in the game and finished with 17 total hits.

Both teams got a run in the fourth inning.  Spearfish added two more in the bottom of the sixth.

Tjaden had three singles and three RBIs.  Frost finished with two hits and two RBIs.  Millage also had two hits, one a double.  Schoolmeester had a single and an RBI.  Fersdahl had a triple.  Stubbe and Konrad Richeal both had a hit.  Richeal pitched 3 1/3 innings and allowed three earned runs on four hits and three walks with four strikeouts.  Tjaden pitched 2 2/3 innings and allowed eight runs, five earned, on two hits and 10 walks with five strikeouts.

A nine-run fourth inning helped Dell Rapids 16U to a 13-6 win over Tea on Thursday, June 30th.

Tea took the first lead with a two-run bottom of the fourth inning, but Dell Rapids tied the game with two runs in the top of the second.  Luke Schoolmeester had an RBI single, and Cooper Frost followed with an RBI triple.  Dell Rapids then broke the 2-2 tie with their nine-run fourth inning.  Cole Ruesink had a two-run single.  Sutton Williams added an RBI single.  Quinn Carr followed with a three-run double.  Talan Millage brought home a run with a single, and Konrad Richeal and Ruesink both had a bases-loaded walk to give Dell Rapids an 11-2 lead.

Frost had three hits, including a triple, and two RBIs.  Carr had two hits, one a double, and three RBIs.  Williams and Millage both had two hits and an RBI.  Ruesink finished with a hit and four RBIs.  Schoolmeester and Richeal both had a single and RBI.  Ethan Kringen had two hits, and Lincoln Fersdahl and Micah Pickard both had a hit.

Tea Gold took the lead in the bottom of the first and led the whole rest of the game in a 14-4 win over Dell Rapids 16U on Tuesday, June 28th.

Dell Rapids got two runs right away in the top of the first.  Tad Tjaden scored on an error, and Sutton Williams drew a bases-loaded walk for an early 2-0 lead.  Tea, however, scored four times in the bottom of the first.  The score was still 4-2 through three innings of play.