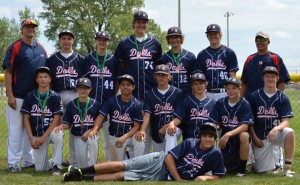 Dell Rapids 15s ended their season in Humboldt August 7th and 8th after losing both of their games in the State A VFW Varsity Teener Tournament.

They lost their first game 8-2 against Canova-Salem on Friday, August 7th.  Dell Rapids kept things close through four innings despite four errors.  However, already leading 3-2, Canova-Salem would go on to score three runs in the fifth inning and close the book on the Dell Rapids starting pitcher Austin Ellingson.  Ellingson took the loss for Dell Rapids allowing six runs, five earned, while striking out six.  Eddie Price would enter the game in relief, but allow two more runs in the seventh inning.  Price picked up the lone Dell Rapids hit.

Dell Rapids then faced Milbank on Saturday, August 8th, in an elimination game.  Milbank jumped out early scoring two runs in the top of the top of the first inning, but Dell Rapids would answer in the bottom half of the inning.  Seth Spielmann reached on a walk and advanced to second on a Carter Gullickson single.  Keegan Miller drove in both base runners with a double to the right field gap.  Miller then stole third and advanced home on a throwing error from the Milbank catcher.

Those three runs would be all the offense for Dell Rapids.  Milbank picked up another run in the second inning to tie the game at 3-3.  That’s where the  score remained until the final inning when Milbank added two more runs on two Dell Rapids errors, sealing a 5-3 victory.

Gullickson would go the distance for Dell Rapids, but took the loss allowing five runs, but only three earned.

The Dell Rapids 15s Teener team qualified for the 15/16 State A VFW Teener Tournament by placing 2nd in the Region 3A tournament which was held in Dell Rapids at Rickeman Field July 27-29.

Now in the loser’s bracket, Dell Rapids came back and won their next game over Dell Rapids 16s 9-0 on Tuesday, July 28th.  Dell Rapids 15s turned two double-plays in the first and second innings.  Austin Ellingson struck out 11 batters in a complete-game shutout.  Story threw out two attempted base stealers at second during the game.  Jeffry Schuch led the offense for Dell Rapids 15s going 3-4 with a double and five RBIs.  Keegan Miller added two hits, and Ellingosn, Carter Gullickson, and Elijah Story each scored two runs.

Dell Rapids 15s earned a spot in the finals by defeating Tri-Valley 2-0 on Wednesday, July 29th, in an exciting pitching dual.  Gullickson carried a perfect game into the sixth inning, which is when Tri-Valley would get their only hit of the game.  Gullickson finished the one-hit shutout for the win by striking out six batters.  The defense was solid for Dell Rapids as they did not commit an error in the game.  Miller was 3-3 offensively with three singles.  Spielmann went 2-3 and drove in both runs of the game.

Dell Rapids 15s met up with West Central again, this time in the championship game, on Wednesday, July 29th.  After a sluggish start to the game, Dell Rapids was able to tie the game at 6-6 in the sixth inning.  However, Dell Rapids would run out of steam and surrender seven runs to West Central in the seventh inning to fall 13-6.  Story, Schuch, Spielmann, Cameron Bruhn, and Eddie Price all picked up a hit and scored a run in the game.  Logan Ruesink was 2-4 with two RBIs.

Since West Central is hosting the 15/16 State A VFW Teener tournament and was already automatically qualified, the region bid in the state tournament went to Dell Rapids 15s after finishing second in regions.

The state tournament will be held in Humboldt August 7-9. 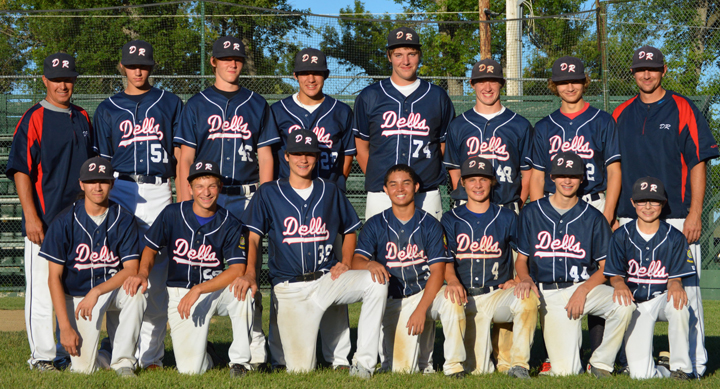