The Dell Rapids Navy 14U season came to an end at the Region 5A tournament on Monday, July 11th.  Dell Rapids played four games, but ultimately had their season end in the championship game to Madison Maroon.

In the opening game of the tournament on Friday, July 8th, Dell Rapids defeated Tri-Valley with a big fourth inning.  Kenny Swanson, Gage Bunkers, and Tollin Peterson all had an RBI in the bottom of the first inning for an early 3-0 lead.  Tri-Valley tied the game with three runs in the top of the second.  After a scoreless third inning, Dell Rapids scored 13 times, all with less than two outs, to get the 16-3 win.

Swanson had two hits, one a double, and four RBIs.  Thomas Lavoy had two hits and two RBIs.  Jackson Peppel added a single and three RBIs.  Bunkers finished with a hit and two RBIs.  Logan Donovan and Peterson each had a hit and an RBI.  Carson Maeschen and Jack Paterson both had a single.

Madison won a back-and-forth game on Saturday, July 9th to advance to the championship game.

Swanson and Peterson both had two hits.  Lavoy and Hanson each finished with a single and RBI.  Peppel and Jake Heinitz each had a single.  Bunkers added an RBI.  Swanson pitched 3 1/3 innings and allowed two earned runs on three hits and a walk with four strikeouts.  Hanson also pitched 3 1/3 innings and allowed three runs, all unearned, on two hits with a strikeout.

Dell Rapids and Tri-Valley met again in an elimination game on Monday, July 11th.  Tri-Valley built an early 4-0 lead, but Dell Rapids overcame that deficit and then a tie late in the game to advance to the championship.

Tri-Valley tied the game in the top of the sixth, 5-5, but Dell Rapids scored four times in the bottom of the inning.  Maeschen scored on a passed ball.  Paterson added an RBI double.  Jake Heinitz had an RBI single, and Donovan had an RBI sacrifice fly.  Tri-Valley started the seventh with a walk and single, but the next three batters were retired to end the game.

Heinitz had three hits and an RBI.  Paterson had two hits, one a double, and three RBIs.  Donovan finished with a hit and two RBIs.  Swanson had a double and an RBI.  Lavoy collected two hits.  Peppel, Ryan Stubbe, Maeschen, Peterson, and Caden Zwart all had a single.

Dell Rapids got one run in the top of the fifth.  Swanson scored on a wild pitch with one out to make it a 3-1 game, but Madison got an insurance run in the bottom of the sixth.

The regular season came to an end for both of the Dell Rapids 14U teams on Wednesday, July 6th.  Dell Rapids Red hosted West Central Blue, and Dell Rapids Navy was at Madison Black.

West Central had two big innings, a six-run first and 10-run third, in their 16-1 win over Dell Rapids.  Dell Rapids was held to just two hits in the game and scored their run in the bottom of the third.

Connor Hanson and Caden Bitzer both had singles.  Alex Heinemann had an RBI on a ground out to second that scored Hayes Sehr.  Kaiden Zelmer pitched 2/3 of an inning and allowed just one hit.  Bitzer pitched two innings and recorded two strikeouts.

Madison scored nine straight runs in the first four innings on their way to an 11-1 win in six innings.  They scored five times right away in the first inning and then added a run in the second, one in the third, and two more in the fourth.  Dell Rapids scored their run in the top of the fifth on an RBI double by Carson Maeschen.  Madison scored two more runs in the sixth to end the game.

Conner Hanson and Derek Gerlach each drew a walk in the game.  Caden Zellmer pitched all three innings and recorded four strikeouts.

Parker scored five early runs, saw their lead shrink to one, but held on to beat Dell Rapids Navy 10-5 on July 1st.

Peppel had two hits and an RBI.  Jack Paterson had a double and an RBI.  Donovan and Bunkers each had a single and RBI.  Thomas Lavoy added a hit.  Donovan pitched four innings and allowed eight runs, four earned, on two hits and five walks with 11 strikeouts.  Bunkers pitched two innings and allowed two unearned runs on three hits with two strikeouts.

Tri-Valley Maroon 14U scored 18 unanswered runs in the middle innings of an 18-8 win over Dell Rapids Navy in Dell Rapids on Wednesday, June 29th.

Dell Rapids scored the first four runs in the bottom of the first, but it was all Tri-Valley for the next three innings.  They scored three runs in the top of the second, five in the third, and then had a big 10-run fourth inning to lead 18-4.  Dell Rapids scored four times in the bottom of the fifth, but Tri-Valley stopped the rally to end the game on the 10-run rule. 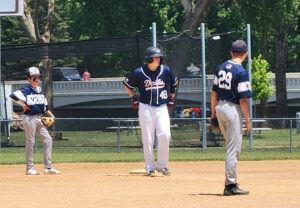 Dell Rapids Navy 14U played two games over the Quarry Days weekend.  They traveled to Elkton on Friday, June 24th and then hosted Volga on Sunday, June 26th.\

Elkton had a 5-2 lead after three innings of play, but Dell Rapids outscored Elkton 18-3 over the next three for the win.

Volga took the lead in the top of the third with a big five-run inning and pulled away from there for an 11-7 win on Sunday.

Dell Rapids Red 14U earned their first win of the season by defeating Tea-D 8-3 at home on Wednesday, June 22nd.

Connor Hanson pitched a complete game recording 14 strikeouts.  Luke Symens had a double and a single.  Parker Zweifel had a base hit, and Sawyer Hebert had a hit and two RBIs.

“The bats came alive along with the defense to support our guy on the mound.  The entire 17 (players) that showed up played and hit, so a true team effort,” said head coach Kevin Symens.

Bitzer and Parker Zweifel both had a hit in the game, and Heinemann had an RBI.  Bitzer also pitched and recorded four strikeouts.  Luke Symens pitched 1 2/3 innings and had three strikouts.

Dell Rapids scored in four straight innings to win a back-and-forth game against Tri-Valley.  Both teams scored a run in the second inning, and then they both had big third innings.

Dell Rapids Navy 14U scored nine times in the first two innings while collecting 10 hits in a 10-2 win over Flandreau on Wednesday, June 15th at Volunteer Field in Dell Rapids.

Logan Donovan got the scoring started for Dell Rapids in the bottom of the first with an RBI single.  Carson Maeschen and Tollin Peterson followed with RBI singles to give Dell Rapids a 3-0 lead.  They would score six more times in the bottom of the second inning.  Maeschen was hit by a pitch with the bases loaded, Peterson and Noah Larson had RBI doubles, Jack Paterson walked with the bases loaded, and Thomas Lavoy had an RBI ground out to push the lead to 9-0.

Donovan earned the win on the mound.  He pitched six innings while allowing two runs, one earned, on four walks while striking out 12 batters.  Swanson pitched the final inning and allowed two walks.

Both Dell Rapids Red 14U and Dell Rapids Navy 14U played in the I-29 League Tournament held in Flandreau Friday, June 10th through Sunday, June 12th.  Both teams finished 0-3 in their tournament games.

Dell Rapids Navy lost a hard-fought 1-0 game to West Central Blue in their first game on Friday.  They lost another close one to Madison Maroon, 4-1, on Friday as well.  Baltic then defeated Dell Rapids Navy 9-4 on Saturday.  Thomas Lavoy had three hits and three RBIs in the three games.  Jackson Peppel and Kenny Swanson both had two hits and two RBIs each.