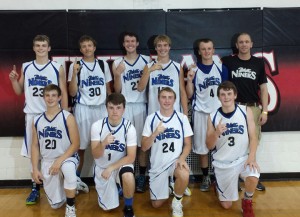 The Dakota Niners basketball team, which includes two players from Dell Rapids High School, played in the Kansas City Premiere Mid America Youth Basketball (MAYB) National Qualifier basketball tournament over the weekend of June 19-21.  Ten players from across the state of of South Dakota make up the team.  Tanner Heim and Mason Peter play on the team.  Their coach is Jeff Larsen who will be an assistant women’s basketball coach at Dordt College this coming fall and who was formerly a coach in Lennox.  The team played a total of five games winning four of them.  The one loss was in overtime on a last-second half-court shot.

By winning the tournament, the Dakota Niners qualified to play in Wichita, KS July 30 through August 2 in the MAYB National Championship Tournament.  Last year over 750 teams throughout the nation participated in this event with over 25 states being represented.