During the Dell Rapids City Council meeting on Monday, January 19th, Tom Earley presented to the council the progress on the library renovation project.  Earley told the council that the library has received around $24,000 in donations since his last update back in November 2014.  Earley also mentioned different aspects of the project in the update.

“The ceramic tile in the bathrooms and entrance way have been installed.  It’s looking good,” said Early.  “The elevator installation is supposed to start next Monday (January 26th) and should take about two weeks.  As that gets close to completion, they will schedule the dry wall people back in to get that area finished off.”

Early provided the council with a timeline for completion.  He noted that the library staff is already preparing for the move from their current location in the River Community Church building (old elementary) back into the library.  The estimation for the move is sometime in late March.

“We are on schedule for completion March 6th.  The week of February 26th I think it is, or thereabouts, we will do the walk-thru for a bunch of us to see what needs to be addressed at that point,” Earley said.

The library was last dedicated on March 16th, 1910.  Earley presented the idea of having a re-dedication ceremony once the project was completed.

“What we’d like to do, once the move is completed and once we’ve had time to figure out if everything is where it ought to be, we’d like to have a re-dedication ceremony, possibly in May.  We would like this to be a community-significant event.  It’s an important resource, and you guys have helped make it possible.  It should be something significant in the life of our community,” he said.

Earley finally mentioned that the Library Board is constructing a short and long-term landscaping plan.

Library Director Brittany Moeller said, “I would add how appreciative we are to the community of Dell Rapids! Everyone has shown tremendous amounts of support during this project, and we are so excited to move back in! We have big plans for the new library, and we can’t wait to get them started!”

The Library addition/renovation project took another step forward with the ground-breaking ceremony that was held on Tuesday, July 8th, at 4:00 p.m.  Past and present library board members, the mayor, city council members, along with many others were on hand to take part in the ceremony.

Library Board President Tom Earley started the ceremony by saying, “We are here to celebrate a significant event to the history of the Dell Rapids Carnegie Public Library.”

“This thing has been a long time coming.  I think as long as I’ve been mayor, we’ve been

working on this project.  This is going to be a fantastic addition to the community.  Want to thank all the people that donated money to this cause,” said Mayor Scott Fiegen.

The Dell Rapids City Council recently voted to provide $360,000 of municipal money to help the library close a gap in funding of the project.  The project is going to add about a 2,000-squre foot addition to the library along with restoration to the current building.

“All along our main priority has been the renovation of the existing Dell Rapids Carnegie Public Library, making the library ADA accessible to all customers and that will be achieved with the addition of the elevator.  We have also wanted to increase the square footage of the library,” said Earley during the ceremony.

Members of the library board of trustees, Mayor Fiegen, Helen Aspaas, and 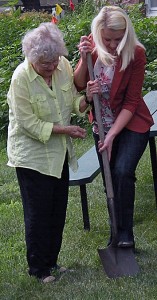