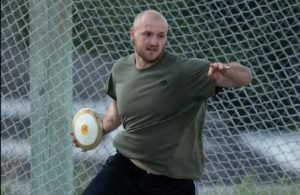 For the second week in a row, Ben Hammer has been named Great Plains Athletic Conference field athlete of the week, after strong performances in the 2016 Sioux City Relays in Sioux City, Iowa held April 11-17, 2016 . Ben qualified for the NAIA National Championships in the shot put after qualifying last week in the discus. He finished third in the shot put with a toss of 15.60 meters to qualify for nationals. In the discus, he took fourth place Saturday with a throw of 48.08 meters, besting all throwers from the NAIA level.

Ben Hammer of Dakota Wesleyan is this week’s Hauff Mid-America Sports/Great Plains Athletic Conference’s track & field athlete-of-the-week.  Hammer, a freshman from Dell Rapids, South Dakota, set a school record, while picking up strong finishes in three events. Hammer placed first in the men’s shot put with a toss of 50′ 2¾”, while adding an eighth-place showing in the hammer throw with a toss of 118′ 6″. His record performance came in the discus with a throw of 169′ 9″, eclipsing the DWU school record by 11 feet. Hammer finished second in the event, qualifying for the NAIA national meet.