The best and brightest from the Class of 2016 were honored for their academic achievements at the 26th Annual Academic Excellence Banquet in Pierre on Monday, May 2nd. 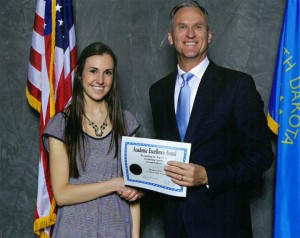 In conjunction with Governor Dennis Daugaard, the Associated School Boards of South Dakota invited more than 200 students, who were identified  as the top one percent of their senior class, from the state’s public, private, and tribal schools to celebrate their academic accomplishments.  Bridget Dunn from Dell Rapids St Mary and Josh Parrott from Dell Rapids Public were two of the students invited. 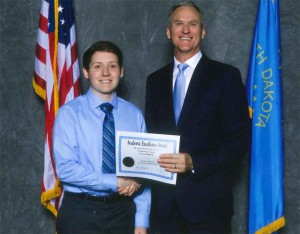 “You are the future of South Dakota.  We hope you will stay in South Dakota and become the next generation of leaders for our state.”

“The prospects for young graduates in South Dakota are better than anywhere else,” Governor Daugaard said.  “Your dreams can come true in South Dakota.”

Prospects and dreams made possible by the hard work the students have put forth.

The event was sponsored by the South Dakota Community Foundation.  The Mobridge-Pollock High School Band provided the musical entertainment.