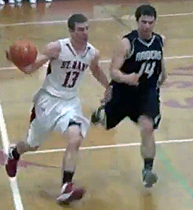 The Dell Rapids St Mary Cardinals won a thriller of a boys basketball game over the Oldham-Ramona-Rutland Raiders on Thursday, February 13th.  The Cardinals held on for 63-61 win.  After trailing 7-11, St Mary finished the first quarter on a 10-point run and took a 17-11 lead after the first quarter.  The Cardinals were able to build on that lead, and went into the locker room ahead 30-20 at halftime.  The Raiders were able to end the third quarter on a little bit of a run and cut the lead down to 43-36 after the third quarter.  Oldham-Ramona-Rutland scored the first three points of the fourth quarter to pull within four points.  But the Cardinals were able to get the lead back to double-digits at 56-45 with 4:06 left in the game.  St Mary held a 58-51 lead with 2:00 left, but the Raiders tied the game at 58-58 with :45 after a three-point shot by Nick Skyberg.

The final :30 were a wild ride as Jared Scholten scored a layup to give the Cardinals a two-point lead with :26 left in the game.  Skyberg answered back with another three-point shot to give the Raiders a 61-60 lead :12 to go.  Ben Bunkers took the inbound pass and drove the entire length of the court for the go-ahead, game-winning layup with :04 left in the game.  Noah Fiegen added a free throw with :02.9 for the Cardinals as St Mary hung on for the win.

Every player that got into the game for St Mary ended up scoring in the ball game.  The Cardinals were led by Matt Farmer with 17 points.  Scholten finished the game with nine points.  Skyberg had a game-high 22 points for Oldham-Ramona-Rutland.  Josh Thurow finished with 13 points for the Raiders.

The Cardinals improve to 5-12 on the year.  St Mary will play host to Estelline on Monday February 17th.