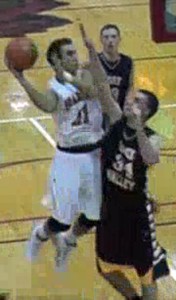 The Sioux Valley Cossacks defeated the Dell Rapids Quarriers 59-52 at the Boys Entringer Classic in Brookings on Saturday, December 28th.  Sioux Valley had a first quarter lead of 16-11, but the Quarriers erased that lead to tie the game at 26-26 heading into halftime.  A tough third quarter for the Quarriers gave Sioux Valley a 43-33 lead after the third quarter.  The Quarriers pulled to within four points a couple of times in the fourth quarter, but the Cossacks were able to knock down enough free throws in the final quarter to hang on for the win.

The Quarriers were led by Ty Hoglund and Ben Hammer who each had 12 points in the game.  Riley Schmidt finished with nine points, and Zach White had eight points.  Cody Nielsen had a team-high six rebounds in the game.  Tayt Vincent had a game-high 19 points for Sioux Valley.  Spencer Hanson finished with 13 points and 12 rebounds.

Head coach Jason Fersdahl said, “I thought we played pretty well in the first half as we battled to a 26-26 tie.  We had good ball movement on offense, and we played very aggressively.  Sioux Valley made a big run on us in the 3rd quarter as they hit some perimeter shots, and we missed some shots we usually make.  I am proud that our team fought back in the 4th quarter, and we had some good opportunities to cut it to a one possession game late, but credit Sioux Valley for consistently hitting their free throws down the stretch and maintaining their lead.  We gave up too many second chance opportunities on offensive rebounds in the second half and good teams really make you pay for those mistakes.”

Dell Rapids falls to 2-1 on the year.  The Quarriers will travel to Elk Point-Jefferson for a Dakota 12 Conference game on Saturday, January 4th.