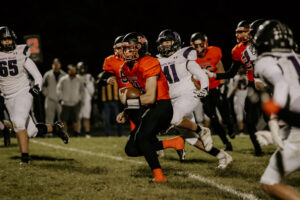 A prediction of 49 points for the Dell Rapids Quarriers was made on the Big Sioux Media pre-game show.  The Quarriers delivered exactly 49 points in their 49-16 win over the Dakota Valley Panthers on Friday, October 15th.

The defense for the Quarriers scored their first touchdown when Jack Henry intercepted a pass and returned it for a touchdown from 50-yards away with 11:24 to go in the half.  After J. Henry’s second interception of the game, Austin Henry scored on a 17-yard run with 8:39 on the clock.  Landon VonHoltum got the final score of the first half on a one-yard run with 1:07 left in the second quarter.

The final Dell Rapids touchdown was scored by Williams on a three-yard run with 7:41 to go in the game.  The Panthers got a touchdown and two-point conversion in the final seconds of the game.  Adam North ended the Homecoming game with his fourth touchdown of the season.

Dell Rapids finished with 232 yards of offense, all of them on the ground.  The Panthers had 177 yards of offense, 149 rushing yards and 28 passing yards.  The Quarriers were 5-8 on third down and 1-3 on fourth down.

The Quarriers will end their regular season on the road at Tri-Valley on Thursday, October 21st.