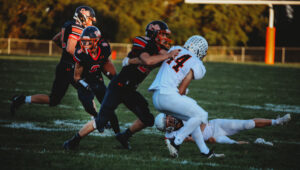 Three scores in the final quarter lifted the Dell Rapids Quarriers to a 28-14 win over the Lennox Orioles at home on Friday, September 19th.  The first three quarters of the game had defensive stops and near misses on offense, but the Quarriers scored in a hurry in the fourth quarter to seal the win.

Dell Rapids got the only touchdown in the first half.  Landon Ruesink scored on a seven-yard run with 7:04 in the opening quarter.   Aiden Boechler made the extra point to give Dell Rapids a 7-0 lead.  That score held for the remainder of the first half.

Lennox started to pick up momentum late in the third quarter.  Jackson Arlt scored on a three-yard run to pull the Orioles within a point.  The extra point was missed as it bounced off the left upright.  Dell Rapids kept the lead at 7-6 after three quarters of play.

The Quarriers quickly took the momentum back from Lennox.  On the very next drive, Ruesink scored on a 33-yard run with 10:27 to go in the game.  Austin Henry completed a pass to Ruesink for the two-point conversion to make the score 15-6.  After a turnover on downs, Dell Rapids took over at about midfield.  Landon VonHoltum found the endzone with 5:55 to go on an eight-yard run.  The extra point was no good, but Dell Rapids led 21-6.  Just :54 later, the Quarriers scored a defensive touchdown when Brayden Pankonen intercepted a pass and returned it 64 yards for the score.  Boechler made the extra point to push the lead to 28-6.  Lennox did get a score with 1:16 to go in the game and also made the two-point conversion.

Ruesink finished with 14 carries for 129 yards and two touchdowns in the running attack.  VonHoltum had 16 carries for 73 yards and a touchdown.  Pankonen had eight carries for 47 yards.  Henry was 3-6 passing for 39 yards.  Ruesink had two catches for 24 yards, and Pankonen had a catch for 15 yards.