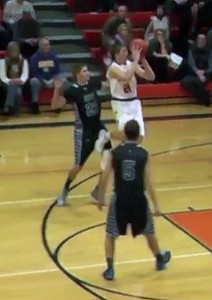 The Dell Rapids Quarriers took a 21-point lead into halftime, but had to fight to hang on for the win 61-57 against the Sioux Falls Christian Chargers on Tuesday, January 14th, in Dell Rapids.  The Quarriers started the game on a 12-2 run, and ended the first quarter with a 15-point lead at 21-6.  Dell Rapids was able to extend that lead to 43-22 at halftime.  The third quarter was tough on both teams as neither offense could get anything going.  The quarter ended with Dell Rapids ahead 49-32.  However, the Chargers made a come-back in the fourth quarter.  SF Christian cut the lead to 12 points at the 3:40 mark, and then got the lead down to just four points with :30 remaining.  Dell Rapids wouldn’t let the Chargers get any closer as the Quarriers hung on for the win.

Head coach Jason Fersdahl said, “We played our best basketball of the season thus far in the first half against a tough Sioux Falls Christian team.  Our pressure defense had SFC frustrated, and we were able to convert their turnovers into transition points early.  We knew that SFC was too good of a team to not make a strong second half run, and they were able to do that in the fourth quarter.”

“We did not shoot free throws well throughout the game, and we left some opportunities on the table to maintain the comfortable lead we built in the first half.  Offensively, we got stagnant in the second half and, when you are not making free throws, things tend to tighten up even more,” said Fersdahl.

“In the end though, we earned another conference victory over a tough opponent, and we showed glimpses of the type of team we can be,” added Fersdahl.

The Quarriers improve to 6-1 on the year, and 5-0 in the Dakota XII Conference.  Dell Rapids will host Cheyenne-Eagle Butte on Saturday, January 18th.  The game will be webcast on Big Sioux Media.

JV Results
The Dell Rapids boys JV team was defeated by a tough Sioux Falls Christian JV team by as score of 42-56.  Even though it was a loss for the team, it was clearly the best basketball that the Quarriers had played this season.  The Chargers shot 8-11 from the free-throw line in the last quarter to seal their victory.  Sheldon Siemonsma was the leading scorer for Dell Rapids with 16 points,  while Sam White added 10, and Tanner Heim chipped in eight points.  Sam White led all rebounders with five for the Quarriers.