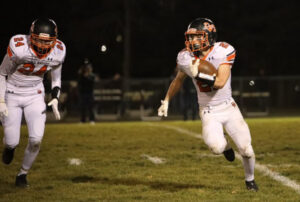 The #4 seeded Dell Rapids Quarriers traveled to the #1 seed Madison Bulldogs for the semifinal game in the 11A playoffs of Friday, November 5th.  On the line was a trip to the Dakota Dome on Friday, November 12th for the 2021 South Dakota 11A Championship.

Both defenses held each other out of the endzone in the opening quarter.  Dell Rapids got the first blow with 8:23 to play in the second quarter.  Austin Henry had a one-yard touchdown run, and the extra point was made by Aiden Boechler to give Dell Rapids a 7-0 lead.  The Bulldogs tied the game two minutes later, and the score remained 7-7 at halftime.

Madison got the two touchdowns on the second half.  With 8:18 to play in the third quarter, Trey Smith had a one-yard run, his second touchdown of the night, to give the Bulldogs a 13-7 lead.  Nate Ricke had a 16-yard touchdown pass to Dillon Bickett with 5:00 to go in the quarter to push the lead to 20-7.  Henry had his second rushing touchdown with 2:13 left in the third quarter on a two-yard run.  Boechler made the extra point to cut the lead to 20-14, which was the score heading into the final quarter.

The Bulldogs had an answer for every score the Quarriers had in the second half.  Smith scored four the third time with 10:24 in the game on a four-yard run.  The two-point conversion was good to extend the lead to 28-14.  Henry added a 10-yard touchdown run with 8:28, and the Quarriers cut the lead to 28-21.  Madison responded again on the very next offensive play on a 65-yard touchdown run by Ricke to make it a two touchdown lead again at 35-21.  Dell Rapids answered right back when Henry completed a 25-yard touchdown pass to Landon Ruesink with 7:31 to play.  The made extra point made the score 35-28.  Madison, however, got a game-sealing 30-yard field goal from Smith with 2:18 on the clock for the 38-28 victory.

Dell Rapids finishes the 2021 season with an overall record of 7-4.