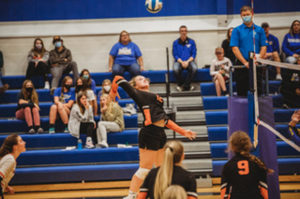 The first set was played close throughout its entirety.  Baltic got ahead by as many as four points at 13-9 and 14-10, but that was the largest lead either team had.  Dell Rapids’ largest lead was two points, and they had that as late as 24-22.  Baltic pulled within a point at 24-23, but the Qurriers got the final point for the opening set win.

Baltic again got out to an early three-to-four point lead to start the third set.    The lead continued to be about four points throughout much of the game.  The Bulldogs got the lead to ten points at 24-14.  Dell Rapids scored four in a row to make it 24-18, but the rally ended there as Baltic won 25-18 to take a 2-1 set lead.

Even though the rally in the third set ended, the Quarriers continued that momentum into the fourth set and opened with a 6-1 run.  Dell Rapids continued to build on the lead as the score reached 22-11 in favor of the Quarriers.  The Bulldogs pulled within three points at 24-21, but Dell Rapids won 25-21 to force the fifth and final set of the match.

Dell Rapids season comes to an end with an overall record of 5-13.