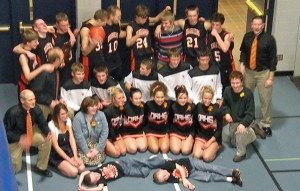 The Dell Rapids Quarriers boys basketball team won the District 6A Championship by defeating the Sioux Falls Christian Chargers 67-63 at the Elmen Center on Friday, March 1st.  The game was exciting from the opening tip as it was back-and-forth throughout the game.  Sioux Falls Christian jumped out to an early lead in the first quarter and led at the quarter’s end 13-8.  Dell Rapids came storming back in the second quarter and took the lead into halftime at 26-24.  The Chargers found knocked down the three-point shot in the third quarter as they took the lead back at 47-43 with only one quarter to play.

The Chargers continued to build their lead to 52-45 with just 5:40 to go in the game.  That is when the Dell Rapids Quarriers went on a 13-0 run to take the lead they would never lose.  Dell Rapids held Sioux Falls Christian scoreless over almost four minutes.  The Chargers finally broke the run with two free throws to cut the lead to 58-54 with just 1:47 left in the game.  The two teams would trade made baskets and free-throws down the stretch, with the Quarriers holding on to win the District 6A title.

Dell Rapids had three players in double-figures on the night.  Bryce Koch had 24 points, Cole Langer had 15 points, and Jacob Morris finished with 11 points.

The Quarriers improve to 17-5 on the year and will take on the Madison Bulldogs in the Region 3A Championship game on Tuesday, March 5th, at the Elmen Center.