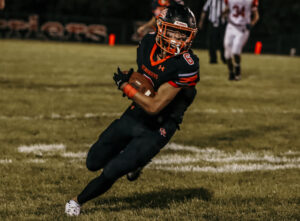 The Dell Rapids Quarriers cruised to a 42-14 win over the Chamberlain Cubs on Friday, September 10th.   It was the first home game of the season for the Quarriers.

Dell Rapids put 21 points on the board in a big hurry in the opening quarter.  Brayden Pankonen found the endzone on a 15 yard run on the second offense play for Dell Rapids.  Four plays later, Pankonen was in the endzone again, this time on a 45-yard interception return.  And just like that Dell Rapids was ahead 14-0.  On their next offensive possession, Austin Henry connected with Landon Ruesink on a 40-yard touchdown pass to give Dell Rapids a 21-0 lead.  Chamberlain got a score in the first quarter to cut the lead to 21-7.  Ruesink scored on a three-yard run in the second quarter, and Dell Rapids led 28-7 at halftime.

Dell Rapids finished with 298 yards of total offense, 151 passing yards and 147 rushing yards.  They had a total of 15 first downs and were 5-7 on third down attempts.

Mason Stubbe and VonHoltum both had five tackles each.  Ruesink, Ian Mason, and Aiden Geraets all finished with four tackles.  Boechler, Will Jaton, and Anstine had three tackles apiece.  Pankonen had two interceptions and a defensive touchdown.