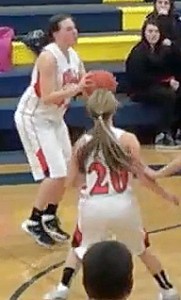 The Madison Bulldogs advanced to the girls Region 3A championship game with a win over the Dell Rapids Quarrires 53-40 on Thursday, February 27th, in Tea.  The Madison Bulldogs jumped out to an 11-1 lead in the first quarter, and extended their lead to 19-2 after the first quarter.  Dell Rapids failed to make a field goal in the quarter and scored their only two points on free throws.  The Quarriers were able to cut into the lead by the end of the second quarter, but Madison still held a 31-17 lead at halftime.  Dell Rapids scored the first five points of the third quarter and trailed 31-22 at that point.  Later in the third quarter, the Quarriers pulled within eight points at 35-27, but Madison finished the quarter on a 6-2 run to push the lead back to 12 points at the end of the third quarter.  Madison was able to knock down enough free-throws to keep a comfortable lead throughout the fourth quarter for the win.

Dell Rapids has their season come to an end with a record of 7-14.  Madison moves on to the Region 3A championship game on Thursday, March 6th, at 6:30 p.m. in Tea.