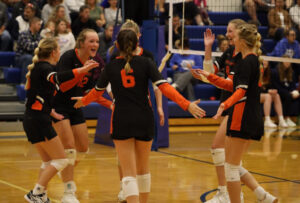 The Dell Rapids Quarrier volleyball team won their third straight match after an exciting five-set win over the Baltic Bulldogs in Baltic on Monday, September 20th.

After an early 9-8 lead for the Quarriers in the opening set, Dell Rapids went on a bit of a run to open a lead they would not lose.  The Quarriers scored six straight for a 15-8 advantage.  Baltic got within four at 15-11, but that was as close as they would get as Dell Rapids took the first set 25-18.

Dell Rapids used the momentum from the first set to build a 9-4 lead to start the second set.  From that point the Bulldogs were only able to get within four again at 10-6.  The Quarriers cruised to a 25-12 win for a 2-0 lead in the match.

The third set was much closer throughout most of it.  Baltic, however, was able to take a slim lead to five points at 20-15 late in the set.  The Quarriers got on a run thanks to the serving of Riley Hill.  The Bulldogs struggled with the serve receive from Hill which allowed Dell Rapids to score six straight for a 21-20 lead.  Baltic was able to regroup to stop the rally and win the third set 25-23.

Sami Polzin had 12 kills for Baltic followed by Elyssa Clark with 11.  Emma VanRegenmorter had eight kills along with four blocks.  Polzin also led the team with 13 digs.  Berklee Erickson had 10 digs, and Clark finished with nine.  Baily Teveldal had 17 set assists in the match, and Jacie Wendland had 15 assists.