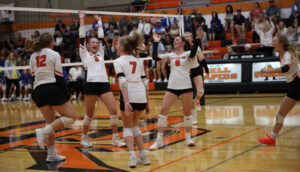 Every single set was back and forth excitement, and the entire crowd was electric from start to finish.  Dell Rapids set the tone early in the first set jumping out to a 9-3 lead.  The Quarriers never trailed in the first set, but West Central pulled within a point late at 21-20.  Dell Rapids held off the rally for the 25-21 win.

West Central got the early advantage in the fourth set, taking an 8-3 lead.  But once again, just as had happened all night long, the set was tied about the midway point at 15-15.  The Quarriers took an 18-15 lead only to see West Central regain the lead at 19-18.  Dell Rapids then went on a 6-3 run to close out the fourth set to force the fifth and final set.

Dell Rapids struck first with a 4-0 run right away.  The Trojans rallied to tie the set at 5-5.   The two teams traded points, and the score was tied yet again at 7-7.  West Central scored three in a row for a 10-7 lead, but the Quarriers battled back to tie it once again at 12-12.  The Trojans then scored the final three points to take the set and the match.

Kenzie Garry and Sophi Randall both had 13 kills, and Emma Van Regenmorter had 11 kills.  JoJo Henry led the team with five ace serves, and Riley Hill added another four.  Van Regenmorter was a force up front with 10 blocks.  Randall finished with nine total blocks.  Garry and Henry both had 18 digs as well.  Hill finished with 12 digs, Lexi Ingalls had 11, and Randall had 10.  Hill had a team-high 21 set assists, and Randall ended the night with 16.