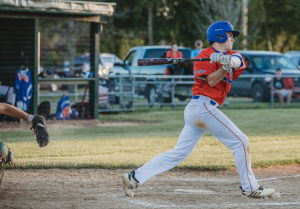 Flandreau put together a big first inning getting their first five hitters on base with four of them scoring to start the game.  Flandreau extended the lead to 6-0 with two more runs in the top half of the fifth inning.

PBR rallied to take the lead in the bottom of the fifth inning scoring seven times.  PBR took advantage of four Flandreau errors and got hits from Beau Behrend, Riley Hoffman, and Aaron Hansen in the inning.  Flandreau regained the lead in the top of the seventh by scoring two runs for an 8-7 advantage.  PBR took the lead for good in the bottom of the eighth inning scoring four times on RBIs from Hansen, Nate McKee, and Carter Gullickson.

Hansen finished the game with three hits and two RBIs.  Gullickson had two hits and three RBIs.  Matt Gillogly had a hit with two RBIs.  Tanner Solberg had a hit and RBI.  Hoffman, Behrend, and Trey Randel also all had a hit in the game.

PBR (5-3) will travel to Colman on Tuesday, June 30th and travel to Madison on Thursday, July 2nd.