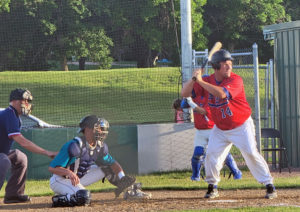 The Dell Rapids Mudcats and Dell Rapids PBR played their first of two regularly scheduled league games against one another at Rickeman Field on Thursday, June 3rd.  The Mudcats, as the visiting team, won 14-0 in seven innings.

The Mudcats added six more runs in the top of the seventh.  Olson had an RBI single, Chad Hunt had a two-run double, and Josh Roemen had an RBI double.  The Mudcats finished with a total of 14 hits.