Preston Nordling hit three free throws with :01.9 after a controversial foul, and lifted the Madison Bulldogs to a 55-54 win over the Dell Rapids Quarriers in the Region 3A Championship game at the Elmen Center on Tuesday, March 11th.  Dell Rapids scored the first two points of the game, but Madison went on a 16-1 run to take a 16-3 lead late in the first quarter.  Dell Rapids was able to pull within 11 by the end of the quarter at 17-6.  Madison again went ahead by 13 points in the second quarter at 28-15, but again Dell Rapids closed out the half on a little run to pull within 10 at 28-18 by halftime.  After another 13 point lead at 33-20 with 6:15 to go in the third quarter, Dell Rapids found their offensive groove and went on a 6-0 run in the next minute to close the game to 33-26.  Dell Rapids finished the third quarter down just four points at 43-39.  The fourth quarter was back and forth, and Dell Rapids captured their first lead since the opening seconds of the game at 54-52 with :12 left in the game.  After a Madison time-out, Nordling took a three-point shot from the right wing that missed, however, the controversial foul on Zach White was called, giving Nordling three free throws with :01.9 left.  Nordling knocked down all three.  Riley Schmidt heaved the inbound pass three-quarters down the court to Cody Nielsen, but Nielsen’s scoop shot at the buzzer was too strong off the backboard.

Schmidt finished the game with 13 points after a strong second half to help the Quarriers fight their way back into the game in the second half.  Zane Schumaker added 12 points for Dell Rapids, and Cody Nielsen finished with eight points.  Jacob Leighton led the Bulldogs with 18 points in the game.

Dell Rapids has their season come to an end with a record of 14-8 on the year.  Madison advances to the State A Tournament in Sioux Falls on March 20th-22nd. 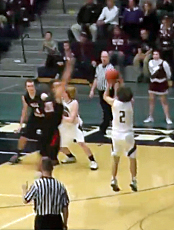 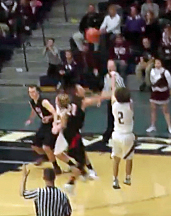 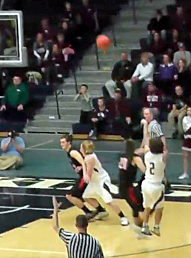