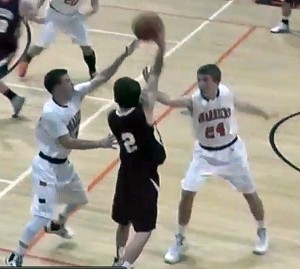 In front of a packed gym in Dell Rapids, the Madison Bulldogs picked up a Dakota XII Conference and Region 3A win over the Dell Rapids Quarriers 71-61 on Thursday, January 23rd, in Dell Rapids.  The Bulldogs used an early 10-0 run in the first quarter to take an 18-7 lead, a lead in which they never lost.  Dell Rapids closed the gap to 18-11 by the end of the first quarter.  Both teams scored 15 points in the second quarter as Madison maintained a seven-point lead of 33-26 at halftime.  The Quarriers closed the gap by one point by the end of the third quarter at 41-47.  With the Bulldogs leading 43-49 in the fourth, Madison went on a 7-0 run to regain momentum and made their free throws down the stretch to hang on for the win.

Ty Hoglund led the team with 22 points, four steals, and three assists in the game.  Cody Nielsen finished with 12 points, seven rebounds, and three assists.  Zach White was also in double figures with 10 points and six rebounds.  Ben Hammer ended with five blocks on the night.  Preston Nordling and Trae VandeBerg each had 17 points to lead the Bulldogs.

The Quarriers fall to 7-3 on the year and 5-1 in the Dakota XII Conference.  Dell Rapids will travel to Vermillion on Thursday, January 30th.  The game will be webcast as part of a double-header with the girls on Big Sioux Media.