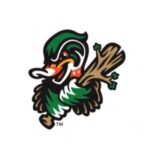 The Humboldt/Hartford Wood Ducks scored three runs in the top of the seventh to tie the game 3-3, but the Flandreau Cardinals got a game-winning hit with two-outs in the bottom of the ninth for a 4-3 Cornbelt League win on Thursday, June 2nd.

Flandreau scored in the bottom of the first inning on a two-out hit for an early 1-0 lead.  The game remained 1-0 until the bottom of the sixth inning.  The Cardinals scored two more runs after a hit batter and three straight singles for a 3-0 lead.

The Wood Ducks put together a two-out rally in the top of the seventh.  Tyler Lundborg hit a single to left field.  Logan Colwill reached on an error.  Nathan Adrian had an RBI single, and Grafton Stroup followed with a two-run double to tie the game 3-3.  The score remained tied until the bottom of the ninth.  Flandreau put some pressure on the Wood Ducks when two batters reached with one out.  Preston Riddle got a strikeout for the second out, but two straight singles ended the game.

Stroup had two hits, including a double, and two RBIs.  Adrian had a single and an RBI.  Ryan Healty finished with two hits.  Bennett Sebert and Lundborg each had a single.  Riddle pitched 8 2/3 innings allowing four runs, three earned, on 11 hits and a walk while getting 16 strikeouts.