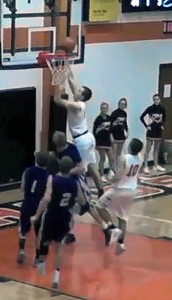 The Dell Rapids Quarrier boys basketball team remained perfect in Dakota XII Conference play with a 72-62 win over the Beresford Watchdogs on Thursday, January 9th.  In the first quarter, neither team had a lead of more than five points, and it was the Quarriers that held a slight 17-15 lead after the first quarter.  Beresford held a 32-31 lead with 1:53 to play in the second quarter before the Quarriers closed the quarter out on a 10-0 run to take  41-32 lead into halftime.  The Watchdogs scored the first 11 points of the third quarter to regain the lead at 43-41 at the 4:47 mark.  The Quarriers scored their first basket of the third quarter with 4:08 to go to tie the game at 43-43.  Both teams would score six points each to end the third quarter tied at 49-49.  The Watchdogs took their final lead of the night with 7:30 left in the game at 52-51.  Dell Rapids then delivered the knock-out punch, scoring the next 15 points over three minutes to take a 66-52 lead that they wouldn’t relinquish.

Head coach Jason Fersdahl said, “This was really a game of runs; it seemed that everytime we were able to extend the lead, Beresford would respond by hitting some big shots.  Fortunately, we were able to make a strong fourth quarter run, and I think our constant defensive pressure throughout the game wore them out a bit down the stretch.”

“Beresford shot lights out most of the night, hitting nine three-pointers for the game, and there were not very many of those shots that were not strongly contested by our defense.  We continued to get good shots on the offensive end, and we were able to finish strong at the basket throughout the night.   We shot free throws better than we have all year,” said Fersdahl.

The Quarriers were led by Ty Hoglund with 18 points.  Cody Nielsen finished with 14 points, and Zach White had 12 points.  Nielsen led the team with seven rebounds in the game.  Ben Hammer and White each had five rebounds.  Hoglund also led the team with three steals and six assists.

Fersdahl said, “We were a little too impatient at times on offense and we will need to improve in this area to increase our chances of winning close games.”

Dell Rapids improves to 5-1 on the year, 4-0 in the Dakota XII Conference.  The Quarriers will host the Sioux Falls Christian Chargers on Tuesday, January 14th.  The game will be webcast on Big Sioux Media.

JV Results
The Dell Rapids JV team outscored the Beresford Watchdogs 30-19 in the second half after a 21-21 tie at halftime for a 51-40 win.  Leading the way for the Quarriers were Mason Peter with 13 points, Sheldon Siemonsma had 12 points, and Sam White finished with eight points.  Dell Rapids shot 9-14 from the free throw line and held Beresford to eight points in the third quarter to pull away for the win.