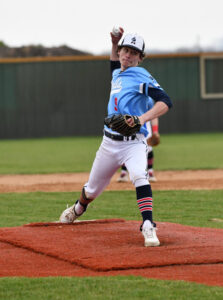 Photo taken and used with permission by Jodie Jaton

Both pitchers pitched a complete game, but it was Dell Rapids that took a 2-1 victory over Sioux Falls Christian in Renner on Thursday, May 5th.  Both starters were on top of their game combining for 19 strikeouts and just two walks.

Dell Rapids broke a 0-0 tie in the top of the fourth inning.  Landon Ruesink started the inning with a single.  He then advanced to second on a wild pitch and then stole third base.  Jack Henry drove him home with a sacrifice fly to give Dell Rapids a 1-0 lead.  Henry notched his second RBI of the game with a single scoring Brayden Pankonen in the top of the sixth inning for a 2-0 lead.

CJ Smith had two hits in the game.  Henry had a hit and drove home both runs.  Pankonen, Ruesink, Eastman, Sutton Williams, and Will Jaton all had hits in the game.  Eastman allowed one run, which was unearned, on three hits with one walk while striking out 13 batters in his seven innings of work.