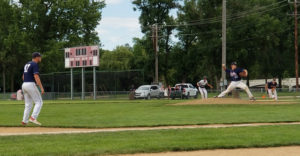 Dell Rapids scored a run in each of the first four innings and held tough defensively for the 4-3 win over Dakota Valley.  Kaeden Eastman drew a bases loaded walk for the first run in the bottom of the first inning.  Logan Ellingson had an RBI double in the second inning to increase the lead to 2-0.  Zeb Schumaker drove an RBI single to center field for the third run of the game in the third inning.  Brandon Geraets added an RBI single in the fourth inning to push the Dell Rapids lead to 4-0.

Dakota Valley got on the board in the top of the fifth inning after a double to cut the lead to 4-1.  They put together a rally in the top of the sixth.  The first two batters reached by an error, and then a double and single followed to make the score 4-3.  The next three batters were retired as Dell Rapids kept the lead.  Dakota Valley got a lead-off single in the top of the seventh.  A fielder’s choice moved the runner to second with one out.  Drew Van Regenmorter ended the game defensively after snagging a ground ball and getting a tag-out, throw-out double-play.

Geraets, Eastman, Schumaker and Ellingson all had a hit and an RBI in the game.  Brady Larson pitched a complete game giving up three runs, one earned, on six hits and just one walk.

In the final game of the day, Dell Rapids defeated Pipestone by a score of 4-1.  Dell Rapids again scored the first four runs of the game.

Eastman again got the scoring started in the bottom of the first with an RBI single.  Dell Rapids got the next three runs in the bottom of the second inning.  After the first three batters reached, Bryce Sommerfeld hit an RBI sacrifice fly to right field.  Landon Ruesink followed with a two-run double to center to make the score 4-0.  Pipestone scored their lone run in the top of the third on an RBI groundout.  Van Regenmorter ended the second game the same as the first with a tag-out, throw-out double play.

Ruesink had a hit and two RBIs.  Eastman had a hit and an RBI.  Riley Peter and Ellingson had the other two hits in the game for Dell Rapids.  Sommerfeld also had an RBI.  Noah Swartwout earned the win on the mound pitching six innings giving up an earned run on five hits with two walks and seven strikeouts.  Jake Steineke earned the save pitching the final inning walking two and striking out one.

Dell Rapids (10-8) will have their final regular season and final home game of the year on Monday, July 20th when they host Tea.  The seniors will be recognized before the game.  The game will also be webcast on Big Sioux Media.