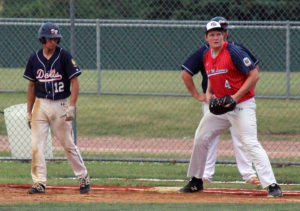 The Dell Rapids legion team split a pair of games during the week.  On Monday, July 6th, Dell Rapids hosted Vermillion.  The team then traveled to Canova to play McCook/Miner on Wednesday, July 8th.

After being held hitless for three innings, Vermillion’s offense then took control scoring 13 runs in the final four innings for a 13-3 victory over Dell Rapids on Monday.

Dell Rapids got the first run on an RBI single by Jake Steineke in the bottom of the first inning.  Vermillion got their first hit with two outs in the top of the fourth inning and also scored three runs to take a 3-1 lead.  They added five more in the top of the fifth inning to extend the lead to 8-1.  Three more runs scored in the sixth, but Dell Rapids was able to extend the game to the full seven innings after an RBI double by Zeb Schumaker and an RBI single by Drew Van Regenmorter in the bottom of the sixth inning.

Steineke, Schumaker, and Van Regenmorter all had a hit and an RBI.  Kaeden Eastman had two hits in the game.  Logan Stone and Riley Peter also had a hit.  Brady Larson pitched the first 4 2/3 innings, taking the loss, giving up seven runs, five earned, on five hits with three walks and five strikeouts.  Logan Ellingson pitched 1 1/3 innings giving up four runs, two earned, on three hits with three walks and a strikeout.  Ty Wood pitched the final inning giving up two earned  runs on three hits with a strikeout.

Dell Rapids was able to bounce back and win against McCook/Miner on Wednesday after a wild seventh inning.

Dell Rapids got a run in the top of the first inning.  Brandon Geraets was hit by a pitch, and his courtesy runner Brandon Kubly came around to score two batters later on a passed ball for a 1-0 lead. McCook/Miner scored a run in the bottom of the first inning to tie the game 1-1 and added two more in the bottom of the second for a 3-1 lead.  That score remained until the top of the fifth inning.

Geraets laced an RBI line-drive single to center field scoring Schumaker to pull Dell Rapids within a run a 3-2.  The score remained 3-2 heading into the seventh inning.  Dell Rapids then exploded for five runs in the top of the seventh by getting six straight batters to reach base safely.  Geraets had an RBI single, Noah Swartwout reached on an error, and that play scored another run to give Dell Rapids a 4-3 lead.  Steineke added an RBI single, Van Regenmorter had an RBI single, and Ellingson had an RBI sacrifice bunt to give Dell Rapids a 7-3 lead.  McCook/Miner would not go away quietly.  They got their first three batters on base which led to three runs to pull within one at 7-6, but Noah Swartwout was able to get out of the inning and get the victory for Dell Rapids.

Geraets had two hits and two RBIs in the game.  Steineke and Van Regenmorter both had two hits and an RBI.  Swartwout and Ellingson both had an RBI, and Schumaker and Eastman both had a hit in the game.  Stone pitched the first five innings giving up three earned runs on one hit with five walks and nine strikeouts.  Swartwout earned the win pitching two innings giving up three runs, two earned, on two hits with two walks and a strikeout.