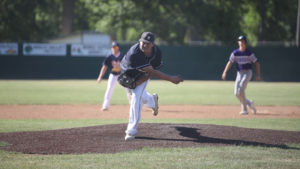 The Dell Rapids Legion baseball team traveled to Flandreau for a double-header and scored 38 runs in two wins on Tuesday, June 15th.  Dell Rapids won the first game 24-6 and then won the second game 14-1.

Kittleson had two more hits, one a double, with two RBIs.  Larson had two hits, one a triple, and an RBI.  Steineke and Roach-Valandra both had a double with three RBIs.  Eastman had two hits.  Swartwout and Andrew Van Dam both had singles.  Zeb Schumaker had an RBI.