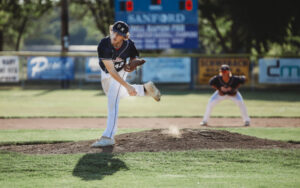 Canova struck first for three runs in the top of the third inning.  A walk, single, errant throw on a bunt, and a dropped third strike led to three runs for Canova for a 3-0 lead.

Dell Rapids got a run back in the top of the fourth on back-to-back doubles.  Noah Swartwout had the first double, and then Kaeden Eastman followed with a double for the RBI.

Canova got their fourth run on a fielder’s choice ground ball in the top of the sixth inning.  Dell Rapids looked to be putting together a rally in the bottom of the seventh.  Eastman started the inning with a single, and Jake Steineke followed with a double to put runners on second and third with no outs, but the next three batters went down in order ending any rally for Dell Rapids.

Eastman had two hits, one a double, and an RBI.  Swartwout, Steineke, and Riley Peter all had a double in the game.