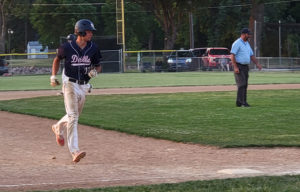 The Dell Rapids Legion team finished a stretch of five games in three days with a double-header against Sioux Falls Post 15 Black on Wednesday, June 16th and then a trip to Volga on Thursday, June 17th.

In the first game, Noah Swartwout had two hits, including a double, with two RBI.  Kaeden Eastman had a hit and RBI.  Jake Steineke, Brady Larson, Caleb Kittleson, and Connor Libis all had hits.  Kittleson pitched 4 1/3 innings allowing 11 runs, 10 earned, on 13 hits with two walks and two strikeouts.  Eastman pitched 2/3 of an inning allowing three earned runs on a hit with three walks and two strikeouts.

Ashaun Roach-Valandra had three hits, including a triple, and two RBIs in the second game.  Riley Peter finished with two hits and three RBIs.  Swartwout and Steineke each had two hits, and each with a double, and an RBI.  Bryce Sommerfeld had two hits, and Landon Ruesink and Eastman both had a hit.  Swartwout pitched 2 1/3 innings allowing seven runs, six earned, on seven hits with one walk and three strikeouts.  Libis pitched 1/3 of an inning allowing five earned runs on four hits with three walks and a strikeout.  Sommerfeld pitched 2 1/3 innings giving up nine runs, eight earned, on six hits with two walks and five strikeouts.

Dell Rapids bounced back the next night with a 12-8 eight over Volga on the road.  After Volga tied the game late in the bottom of the sixth inning, Dell Rapids scored five times in the top of the seventh to earn the victory.

Ruesink finished with three hits, one a triple, and three RBIs.  Eastman had two hits and two RBIs.  Larson also had two hits and an RBI.  Kittleson had a home run and two RBIs.  Andrew Van Dam had a double and two RBIs.  Sommerfeld had a hit and RBI.  Roach-Valandra had a hit, and Josh Deknikker had an RBI.  Ruesink pitched five innings allowing four runs, three earned on five hits with four walks and nine strikeouts.  Roach-Valandra pitched two innings and gave up four earned runs on two hits with five walks and a strikeout.