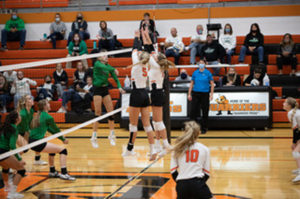 The Dell Rapids Quarriers have played a lot of volleyball over the last week, and they played in their second straight match in as many days on Tuesday, September 29th.  Going back to Thursday, September 24th, this was the seventh match in less than week.

The Quarriers entertained the McCook Central/Montrose Cougars, and the Cougars won in straight sets by scores of 25-20, 25-21, and 25-19.

Dell Rapids, as they have done many times this season, got off to a fast start in the opening set.  After the Cougars got the first point, the Quarriers scored six in a row for a 6-1 lead.  Dell Rapids kept about a three point lead and led 10-7 early.  The Cougars were able to take the lead 16-15 and pushed the lead to 19-15 on the way to the 25-20 victory.

The Quarriers scored the first two points of the second set, but McCook Central/Montrose scored nine straight points for a 9-2 lead.  Dell Rapids was able to pull within two points at 23-21, but the Cougars scored the final two for the 25-21 win.

Dell Rapids (2-11) will play at Lennox on Thursday, October 1st.