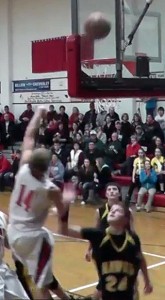 The Colman/Egan Hawks defeated the Dell Rapids St Mary Cardinal boys in the opening round of the District 7B tournament on Monday, March 3rd, in Dell Rapids.  The Hawks erased a nine-point deficit in the final quarter to pick up a 38-34 win. St Mary scored the first four points of the game, but Colman/Egan brought the game to a 6-6 tie at the end of the first quarter.  The Cardinals were able to pull away towards the end of the second quarter, and St Mary held a 19-14 halftime lead.  The Hawks cut the lead down to four points by the end of the third quarter at 26-22.  To start the fourth quarter, St Mary scored the first five points, and opened up a nine-point lead with 6:35 left in the game.  Colman/Egan went on an 8-0 run over the next 2:20 to pull within 31-30 with 4:15 to go.  Colman/Egan continued the run and scored the next four points to take a 33-31 lead with 2:21 remaining in the game.  St Mary was able to pull within a point at 35-34 with :42 left, but that was as close as they would get.  The Hawks hit two free throws with :04.5 left to earn the victory.

The Dell Rapids St Mary Cardinals have their season come to an end with a 5-16 record.  Colman/Egan will travel to Elkton to take on the Elkton/Lake Benton Elks in the second round of the District 7B Tournament on Tuesday, March 4th.