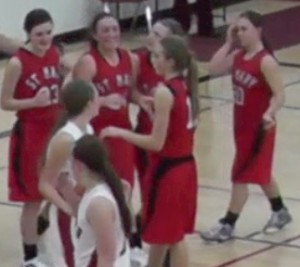 The Dell Rapids St Mary Cardinals girls basketball team pulled out an overtime win over the Chester Flyers 51-48 on Monday, December 30th, in Chester.  The Cardinals jumped out to an early seven point lead in the first quarter and led 13-7 after the first break.  However, Chester held St Mary to just four points in the second quarter and took the lead at halftime at 19-17.  The Flyers extended their lead to nine points in the third quarter before St Mary scored the last four points to pull within five at 32-27 at the end of the third quarter.

Then in the fourth quarter, the game really got exciting.  St Mary was with three points at 32-29 with 7:22 left in the game after a Kelly Michel basket.  Neither team scored for nearly two minutes before Chester scored the next five points to take a 37-29 lead with 4:01 to go.  Each team traded points, and the Flyers again had an eight-point lead with 3:30 left in the game at 39-31.  Amber Hansen knocked down a put-back layup with 1:24 left in the game.  After a missed free-throw, Michel hit a three-point shot with :34 left.  Chester’s Logan Miller was fouled with 12.2 second remaining.  She hit the first free-throw, but missed the second, giving the St Mary Cardinals one last chance.  With :00.2 seconds on the clock, Hansen made a shot from the left block and was fouled as time expired.  Her free throw was no good, but the game went into overtime tied at 40-40.

In the overtime session, the two teams were again tied at 42-42 with 2:46 as Hansen stepped to the free-throw line with two shots.  She made both free-throws, and then at the 2:05 mark, Hansen had another rebound and put-back to give the Cardinals a four point lead.  The Flyers tied the game again at 46-46, but Kaitlyn Vortherms hit a shot from the right elbow with :51 left in overtime.  Hansen would again make two more free-throws with 11.4 seconds left to give St Mary a three-point lead and the win.

Hansen led St Mary with 17 points, including the game-tying basket at the buzzer, and six points in overtime.  Michel added 15 points, and Anna Wolles had eight points in the game.  Chester was led by Elena Borah with a game-high 19 points.

Dell Rapids St Mary improves to 3-3 on the year.  The Cardinals will host Marion on Friday, December 3rd.