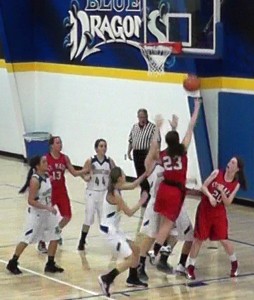 The Garretson Blue Dragons scored the first six points of the varsity game Tuesday night in Garretson and went on to defeat Dell Rapids St Mary Cardinals, 48-32.  Garretson had three players in double figures as they had a 10 point lead after one quarter and a 14 point lead by halftime.  Leading scorer for the Cardinals was Kelly Michel with 13 points.  It was the first game of the season for both teams.   The Cardinals won the JV game, 25-15.  The next game for St Mary girls basketball will be Thursday, December 6th, at home against DeSmet.   Big Sioux Media (who streamed the Tuesday night game) will be streaming Dells St Mary boys basketball on Friday, December 7th, when they open their season at home hosting DeSmet.