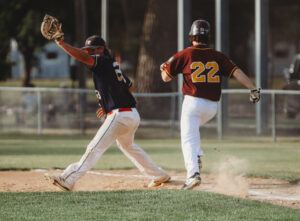 Madison had a six-run fifth inning that was the difference in the game as they defeated Dell Rapids 12-8 at Rickeman Field on Wednesday, June 23rd.

Then came the big inning for Madison.  The first three batters reached on a double, triple, and then single to give Madison a 4-3 lead.  Dell Rapids got the next two batters, but Madison followed with a triple, walk, single, and double to push the lead to 8-3.

Riley Peter had an RBI single for Dell Rapids in the bottom of the sixth to cut the Madison lead in half at 8-4.  Madison padded their lead with four runs in the top of the seventh off of two hits while taking advantage of two walks and two errors.

Dell Rapids put together a rally with two outs in the bottom of the seventh.  Landon Ruesink had a two-run double.  Steineke drove home two more runs on a double to cut the lead to 12-8, but the rally ended there for Dell Rapids.

Steineke had three hits, including a home run and double, and five RBIs.  Noah Swartwout and Kaeden Eastman both had two hits.  Ruesink had a double and two RBIs.  Peter finished with a hit and an RBI.  Josh Deknikker also had a hit.