The Tri-Valley Mustangs defeated the Dell Rapids Quarriers for the second year in a row, this time during the Tri-Valley homecoming, by a score of 28-21.  The Mustangs scored in every quarter and led 14-0 mid way through the second 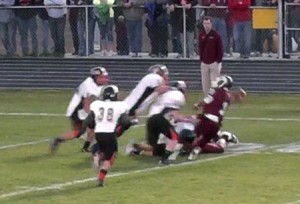 quarter before Dell Rapids scored a touchdown on a 10-yard TD run by Matt Kolbeck to cut the lead down to 14-7 at halftime.  Dell Rapids took the kickoff to start the second half and scored on a 10-yard TD run by Riley Schmidt after a 5:00 drive to tie the game up.  Tri-Valley then scored on their first possession of the third quarter on a 2-yard TD run on fourth down by Brett Page with 0:41 left in the quarter to take the lead back at 21-14.  Cole Langer would score on a 4-yard run with 7:37 left in the game as the Quarriers tied the game up again, this time at 21-21.  With 3:11 left to play, Tri-Valley scored the go-ahead touchdown on a 4-yard pass play from Brett Page to Logan Otto to take a 28-21 lead.  The Quarriers had the ball in Mustang territory with just over 1:00 to play, but a fourth-down pass fell incomplete, and the Mustangs were able to run the clock out for the win. 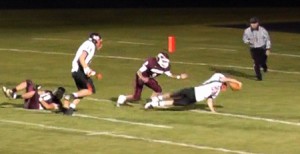 The big stat of the night was Tri-Valley converting on 6 of 12 3rd down chances, while the Quarriers were only able to convert 2 of 9 chances.  Both teams converted three 4th down

chances.  The Mustangs also had the ball for 7:30 longer than Dell Rapids in the game.

The loss drops the Quarriers to 3-1 on the season.  Dell Rapids will host the Tea Area Titans for Homecoming on Friday, September 28th, and the game will be webcast on Big Sioux Media.