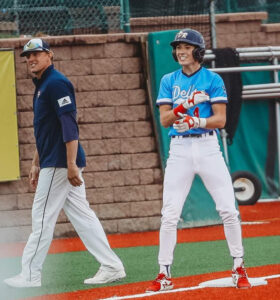 Dell Rapids took a step closer to defending their 2021 title with an opening round win in the 2022 State B Tournament on Monday, May 30th in Sioux Falls.  They got two big hits in the fourth inning and had a strong day on the mound in a 3-1 win over Parkston.

Dell Rapids put the pressure on Parkston, who was the last team to beat Dell Rapids, right away in the bottom of the first inning.  Brayden Pankonen and Dylan Mathis both had singles.  After Pankonen stole third base, he scored on a balk for a 1-0 lead.

Parkston tied the game in the top of the third inning without a hit, taking four walks in the inning.  Dell Rapids’ big hits came in the bottom of the fourth inning.  Jack Henry started the inning with a walk.  Aiden Boechler hit a double to right field, but didn’t see that Henry was being held at third.  In a bit of confusion for the Parkston defense with Boechler nearing third base, Henry took off for home and scored safely.  Boechler was also safe at third.  Mason Stubbe followed with an RBI single for a 3-1 Dell Rapids lead.

Stubbe had two hits and an RBI.  Boechler finished with a double.  Pankonen, Mathis, Will Jaton, CJ Smith, and Treyse Eastman all had singles in the game.  Henry earned the win on the mound pitching four innings while allowing an earned run on one hit and seven walks with eight strikeouts.  Pankonen pitched 2 1/3 innings allowing two hits and a walk with one strikeout.  Landon Ruesink pitched the final 2/3 of an inning.

This was the only opening round game that was able to be played.  The rest of the games were postponed due to weather.  Dell Rapids will play the winner of Madison vs Platte-Geddes at 2:05 p.m. on Tuesday, May 31st.

Updated Schedule for Tuesday, May 31st: