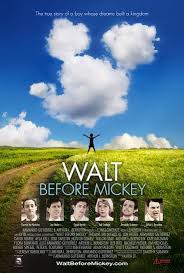 The Midwest premiere of the new movie “Walt Before Mickey” will be held at the Logan Luxury Theatres in Mitchell, Huron and Dell Rapids on Friday, August 28.  The producers of the film, Armando Gutierrez and Arthur L. Bernstein, will be at all three locations for the festivities.  The film will show at all three theaters for one week Friday through Thursday, August 28-September 3.

The producers will arrive at the Dells Theatre at 6:30 p.m., Thursday, August 27th, for the 7:00 p.m. “Red Carpet Advance Showing” where Mayor Scott Fiegen will welcome the producers to Dell Rapids and honor them with a presentation.  The movie will be introduced by the producers who will also hold a question and answer discussion following the film.  The movie will begin its regular showings for the week on Friday, August 28.  The public is invited to the Thursday advance showing as well as all showings during the week.

Premiere festivities will also be held Friday at the Luxury 5 Cinemas in Mitchell and on Saturday at the Huron Luxury Cinemas in Huron.

“Walt Before Mickey” stars Jon Heder (“Napoleon Dynamite” and “Blades of Glory”) as Roy Disney.  Jodie Sweetin (from TV’s “Full House”) plays Walt’s young bride, Charlotte.  Thomas Ian Nicholas (“Rookie of the Year” and “American Pie”) plays the young Walt Disney.  David Henrie (“Mall Cop 2” and “Wizard of Waverly”) plays artist Rudy Ising.  Few people today realize the struggles and failures Walt went through before finally finding financial success before he created Mickey Mouse.  Walt assembled a team of animators who would lead animation for Disney and other studios for the next four decades.  It is an inspirational story of a young man’s vision and fight to succeed despite obstacles and unfair treatment by larger companies.  The producers, Gutierrez and Bernstein, also took roles in the film.

Gutierrez previously produced “Henry and Me” starring Richard Gere and “Ask Me Anything” starring Britt Robertson.  Gutierrez holds a graduate degree from Harvard.

Logan Luxury Theatres Corporation president Jeff Logan first met the producing partners at the Cinemacon Convention two years ago.  Logan worked with them over the past year to develop the plan for the midwest premiere over the past year.