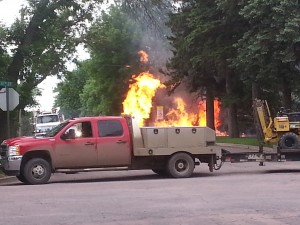 A punctured gas line and a vehicle backfire caused a gas explosion in Dell Rapids around 11:00 a.m. on Tuesday, June 10th.  A contractor was drilling near State Ave and 10th Street when they punctured a gas line causing a leak.

According to Dell Rapids Fire Chief Mike Steen, a driver was attempting to start a car in the area, and the gas leak caused the car to erupt in flames.

By the mid afternoon hours, MidAmerican Energy crews arrived on the scene to dig under the street and clamp the gas line to stop the leak. There were no shut off valves because the leak was on a main line.  Emergency crews spent hours pouring water on the gas leak burn until the clamps were put into place.

No injuries occurred during the day.  There was also no other structural damage other than the car that was part of the explosion.  Some homes in the area along with Dell Rapids St Mary School were evacuated until things were under control.