The Dell Rapids City Council reported vandalism to Deputy Lowe of the Minnehaha County Sheriff’s Office during their regular meeting on Monday, April 3rd.  Deputy Lowe asked if there were any concerns from the council during the meeting.

“It was brought to my attention from the girls scouts that in city park that someone defecated on the slides on top and there is quite a bit of graffiti,” said city councilman Barry Berg.

It was noted that some of the vandalism happened the weekend of April 1st and April 2nd.  The city’s public works department cleaned the slides on Monday, April 3rd.  The girls scouts have plans to attend the next council meeting on Monday, April 17th, to present an idea to the council of cleaning up the graffiti in the caboose.

It was also asked of Deputy Lowe if there were other reports of break-ins other than a recent garage break-in in Dell Rapids, but Deputy Lowe reported back that there hasn’t been a string of break-ins since late December to early January which were a couple of storage sheds.

Even though Deputy Lowe reported there hasn’t been a string of break-in reports, there have been other issues of vandalism and theft in the past few weeks. Alliecat Creations in downtown Dell Rapids had windows broken out on March 18th, and there are posts on Facebook of a recent theft of a canoe. 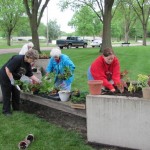 The Dell Rapids Garden Club spent one summer afternoon placing flowers in the 11 planters at the main city park.  The club has purchased, planted and maintained the planters for over 20 years as part of a beautification project for the city of Dell Rapids.  But it can be a time consuming task since the club takes the time to water these planters three times a week.  However, one club member explained, “We want to share our joy of planting and growing flowers with the city.”

Sadly there have recently been problems with this project … vandalism!  Twice in the two weeks since the flowers 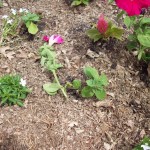 were planted, several plants have been pulled out and thrown.  This week the plants were destroyed by someone walking on the top of the flowers which meant the flowers had to be replaced.

The Dell Rapids Garden Club intends to keep beautifying the park with plants and color and they ask for your help.  If you see someone playing in the planters, please tell them to stop.  If you see something happening and you feel like you don’t want to say something, you can call the Sheriff’s department, they have been notified of these incidents and will be patrolling the park more often.

Please help us keep our beautiful park a safe and joyful, beautiful and fun place for all citizens of Dell Rapids.