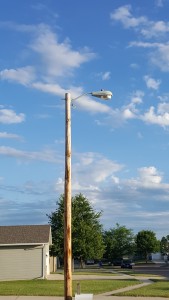 The Dell Rapids City Council received a report from City Administrator Justin Weiland that the city of Dell Rapids could see additional street lights added around town.  This report came during the council’s regular meeting on Monday, June 19th.

Weiland along with Public Works Director Larry Schildhauer met with representatives from Xcel Energy to plan for the installation of the additional street lights in a few places around town.  The new 10th street project area is one area that will receive new street lights.  Quartzite Street and Garfield Avenue in the new industrial park will also receive lights.  Weiland also mentioned that a few additional lights will be put on Zero Street near Garfield Avenue and Orleans Avenue near Rickeman Field.  There are also plans to install additional lights on Highway 77 north of the four-way stop to help with darkness in these areas.

“We have some initial costs based on what infrastructure is there.  We then pay a lease fee per light,” said Weiland.

City Administration hopes to have the lights installed yet in 2017.