The city of Dell Rapids will be having a public meeting at St Mary’s Catholic Church on Monday, December 11th for the south east infrastructure project.  The meeting will take place in the Parish Hall starting at 6:00 p.m. with a question and answer period with city administration.  The city’s slide show presentation will begin at 7:00 p.m.

This project is to replace water and sewer lines in this section of the community, and then replace streets and add curb, gutter and sidewalks to areas that do not have it currently.  The area of the project will run south of 7th St to 3rd st and east of Garfield Ave to Beach Ave. 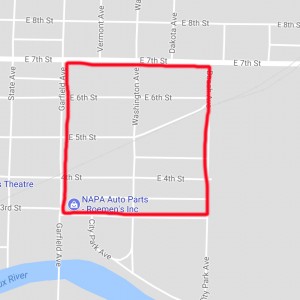 “This is a big one.  This is an estimated $6.5 million project with about $800,000 in assessments associated with it.” said City Administrator Justin Weiland during the Dell Rapids City Council meeting on Monday, November 20th.  The assessed values are for curb, gutter, and approaches on properties that don’t currently have them in place.

“This is an investment and an improvement to our community. Obviously they are going to have to buy in. We want this meeting to provide the people the information they need,” said Dell Rapid Mayor Tom Earley.  “This is another critical point in the development of this community, and it’s something that needs to happen.”

The tentative timeline of this project will be in 2019 and 2020.  Trent Bruce of DGR mentioned during the council meeting that some sophisticated railroad crossings and likelihood of rock blasting that will have to be addressed during the project.  He also mentioned that giving contractors more time to do a project generally results in favorable bids for the project.

“This is an introductory meeting to let them (property owners) know that this is coming down the pipe,” Weiland said.