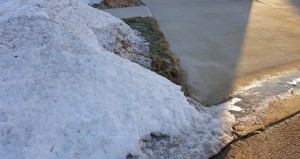 City Administrator Justin Weiland said, “Last time we talked about this, the consensus of the council was to enforce on a complaint basis.”

Alderman Mike Sterud made a comment about the ordinance. “It shouldn’t take a neighbor to complain about snow and ice in order to use the sidewalk. There are people that need to use the sidewalk, and there are people that want to use the sidewalk. I see kids, people with pets walking on the roads…As a homeowner I would feel guilty calling to complain about my neighbor. It should be there to use. The other side of that, no one wants to feel like they are being policed by the city….I’d say for the majority of the community, most people clear their sidewalks. It’s just a few that ignore it, and it’s not being enforced.”

Members of the community also spoke about the council’s decision to enforce the ordinance on a complaint basis. Jeremy Merry said, “This is one of my pet peeves. I’ve got several neighbors in my area that will not do it.” He also mentioned, “I’ve got elderly people in my neighborhood that can’t go out for walk because they won’t remove the snow.”

Teri Fiegen mentioned, “I don’t understand how you can pick and choose which ordinances you want to enforce and which ones you don’t want to enforce.”

After much discussion between the council and members of the audience on hand speaking on the issue, Sterud made a motion to enforce the snow removal ordinance, which was seconded by Alderman Mike Geraets. The motion passed unanimously.

Fiegen then asked, “How will this be enforced?”

“The Code Enforcement Officer will be going around the community and addressing all the sidewalks that haven’t been,” replied Weiland. 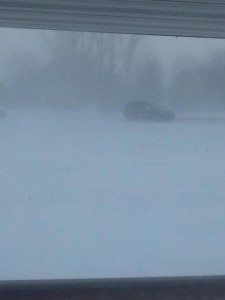 During the City Council meeting on Monday, January 5th, the current snow removal ordinance received discussion.  Councilman Mark Crisp requested that the council discuss the current ordinance.  The current ordinance, which was adopted on October 17, 2011, and made effective on November 16, 2011, states that when a snow alert is declared for the City of Dell Rapids, there is no parking on either side of the street for the duration of the snow alert.

Crisp said, “Why was this ever changed?  I just don’t know the purpose of it.  When you are out ticketing cars right after the snow plows start plowing, you’re taking law enforcement that might be attending accidents and having them write tickets.  You’re forcing people who live primarily in the interior part of town where they don’t necessarily have garages or off street parking to have to skip work to dig their car out after a bad storm.  Where are they going to dig their car out and put it?  The streets haven’t been plowed yet….I don’t see why we tried to fix something that isn’t broken.”

When Crisp asked why was the ordinance changed, Mayor Scott Fiegen said, “People were unclear about when’s 24 hours from when?  When are you going to actually clear the streets?  By doing the alert, which I love, it says okay, the snow’s going to quit.  I got the text alert today.  It says at 4:00 a.m. these guys are going to start plowing.  Make sure your car is off the street.”

Weiland also said, “We didn’t come at this decision lightly when we went through this.  There was input from the public works, input from city attorney, input from all the council, there were many, many different ordinances reviewed.”

Councilman David Sommerfeld added, “This ordinance was put in place for something to make it nice for everybody….Another reason we talked it over very carefully (is because) it’s dangerous for our employees to swing in and out of these streets when they are trying to plow the streets, especially when there are cars on both sides of the street.”

No action was taken during the council meeting and the current snow removal ordinance will remain as is.  The old ordinance has since been removed from the city’s website.