The calendar will include built-in snow days again, but only two instead of three.  The two built-in snow days are February 15th and April 5th.  The first day of school will be on Wednesday, August 26th. Christmas break will start on Wednesday, December 23rd with school resuming on Monday, January 4th. The final day of school is scheduled for Friday, May 21st, 2021.  Graduation will be held on Saturday, May 15th, 2021.

If there is a need to make up more than two snow days, those days will be made up after the May 21st date. 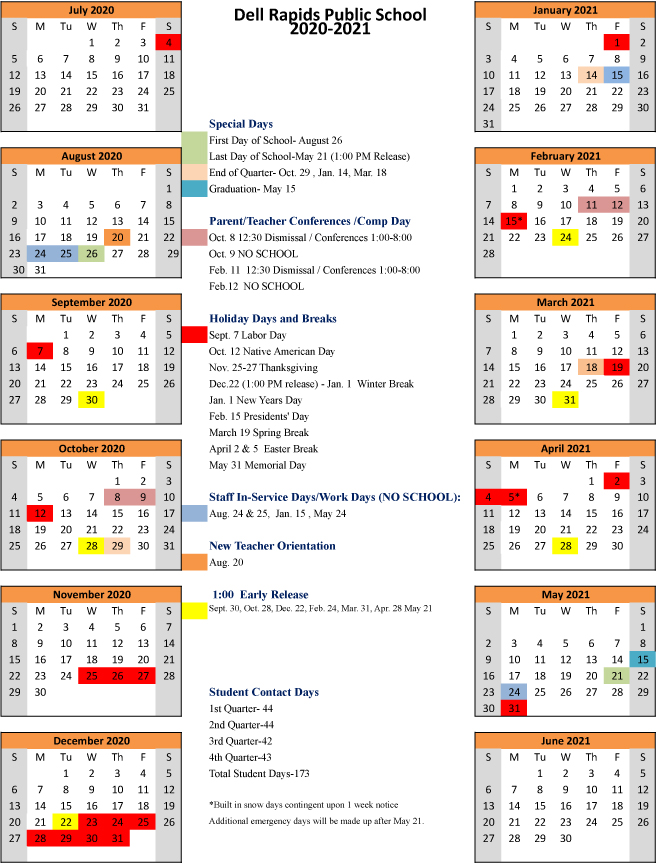 Both Dell Rapids and Dell Rapids St Mary schools have their 2018-2019 scheduled planned.  The Dell Rapids School board approved the calendar during their regular meeting on Monday, February 12th.

“This 18-19 calendar is very similar to what we’ve been doing.  The start date…we’re kind of creeping back up there to earlier in that third week (of August), which if I didn’t do that, we were right up against Memorial Day which people have also said they don’t want.  They don’t want to start early in August, but they want to be done by Memorial Day.  So in order to do those two things, this is kind of where it had to be,” said Dell Rapids Superintendent Dr. Summer Schultz during the board meeting.

The 2018-2019 school year will begin on Thursday, August 23rd for both schools.  The scheduled last day of school would be Tuesday, May 21st, 2019 for both schools.  The Christmas break will run from Monday, December 24th until Wednesday, January 2nd with students returning to class on Thursday, January 3rd, 2019.  The Dell Rapids St Mary graduation is scheduled for Friday, May 17th, 2019 while the Dell Rapids graduation is scheduled for Saturday, May 18th, 2019.

​The Dell Rapids St Mary 2018-2019 calendar is almost completely set.  Dell Rapids St Mary 7th-12th principal Casey Michel said, “We’re pretty set on it. Only thing really up in the air is Carnival date, but I have both dates on there that it could be.”