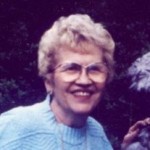 Rosella Mae Nelson was born on May 10, 1932, in Dell Rapids, to David and Emma (Christensen) Nelson. She graduated from Dell Rapids High School and Dakota State University in Madison.   She married Grant “Thomas” Van Duzee on June 15, 1956, in Dell Rapids.  Rosella taught third grade in Huron. She later worked at the Elaine Lass Nursery School and Klines Department Store in Clinton.  She was a member of the First United Methodist Church.

She is survived by her husband, Tom of Clinton; daughter, Debra Van Duzee of Gum Spring, Va.; two granddaughters; her sister, Loraine Ollis of Athens, Ga.; her brother, Roger (Darlene) Nelson of Dell Rapids; and her sister-in-law, Gwyn Brenner of Huron.

She was preceded in death by two sisters and one brother.

Memorials may be sent to the First United Methodist Church’s Food Pantry. Condolences may be left at www.snellzornig.com.