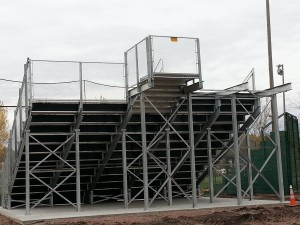 Work on the new grandstand project for Rickeman Field is currently in process.  The concrete slab under the grandstand was poured the week of October 12th, and assembly of the grandstand structure has begun and should be completed before November.  However, the press box piece of the grandstand will not be in Dell Rapids for another couple of weeks according to City Administrator Justin Weiland.  The electrical portion of the project will happen when the press box is installed.

The Dell Rapids City Council budgeted $70,000 for the project for 2015 and then approved a proposed project estimated at $72,000 on Monday, August 3rd.  The finished project included the new grandstand with mounted press box at the top, electrical work, and the new concrete pad under the grandstand.

Dell Rapids Rickeman Field will now be getting a new grandstand. The Dell Rapids City Council approved moving forward with the project during their regular meeting on Monday, August 3rd.

City Administrator Justin Weiland said, “We have firmed up those numbers (the concrete). I estimated at around $9,000, and narrowed that down to $5,000 at $5.00 a square which is still estimating a little high.”

“Personally what I think is option A, just going ahead and doing it. We’ve got it to $72,000. We’re within $2,000 of budget. That’s the closet project that we’ve had budgeted this year, “ said Councilman Mark Crisp. Crisp then made the motion to approve option one, which was seconded by Councilman David Sommerfeld.

The motion passed unanimously to move forward with the project to replace the grandstand with a new grandstand that has a press box mounted at the top, electrical work, and new concrete pad under the grandstand. 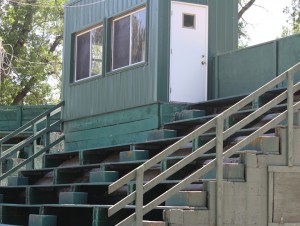 The Rickeman Field grandstand replacement project continues to be in a holding pattern.  The Dell Rapids City Council decided to table the decision on awarding the bidding of the project during their regular meeting on Monday, July 20th.

The council took no action on the putting the project out for bid during their meeting on June 1st.  Several members of the Dell Rapids Baseball Association asked the council to reconsider and spoke on the need to replace the grandstand during the council’s next meeting on June 15th. During that meeting, the city council voted to put the project out for bid.

The project only received one bid offer.  That bid was from Seating and Athletic Enterprises, LLC of Ellendale, MN for $58,112.  That bid was under the initial estimate of $64,000 for the grandstand with pressbox portion of the project.

The electrical portion of the project, which is separate, carried three options ranging in price from $4,700 to $8,400.  The options were to leave the electrical box where it is and remounting it to the new grandstand or move it to a new location while replacing the grandstand.

The cheaper electrical option is more of a temporary fix according to Dell Rapids Public Works Director Larry Schildhauer.  “I would say the cheaper bid is more of a temporary fix.  We’re going to have to re-do it.  And that would involve tearing out some of the materials that we put in for the temporary.  So we’ll eventually be spending more money than if we did it the right way.”

The concrete slab that would need to be set underneath the grandstand, which is estimated to be a size of 34 foot by 28 foot, was estimated to be around $9,000.  Councilman Mark Crisp said, “That’s kind of spendy…..it’s definitely something we need to take a look at.  How much concrete do we need?  How thick does it need to be? We should really have some quotes on that before approving.”  He also said, “This may bring it into budget if you get the appropriate numbers on your concrete.”

The total cost of the project with new grandstand and pressbox, electrical work, and concrete work came to a total of around $76,000, which is about $6,000 over the $70,000 budget amount.

A motion by Councilman Gary Haak to table the decision on awarding the bid project was made and the second was made by Councilman Lee Burggraff.  Prior to the vote of the motion, Councilman Mike Geraets presented another idea to the council about the project.

“I was approached by St Mary School that they would be willing to let us use their bleachers they purchased.  They have no use for them other than football season, and baseball season and football season don’t overlap….It’s just a matter of moving them from the field,” said Gearets.  He also mentioned an idea of putting a comfort station where the current grandstand sits and then put a pressbox on top of the comfort station while using the bleachers owned by St Mary school.

After no action was taken on the Rickeman Field grandstand replacement project during the June 1st meeting, the Dell Rapids City Council voted to submit the project for bidding after hearing from Dell Rapids Baseball Association board members during their regular meeting on Monday, June 15th.

Mogan said, “Two questions I kept hearing about…’Does Rickeman Field get used?’  I know between two amateur teams, a legion team…four teener teams…we have somewhere between 50 t0 60 baseball games during the summer.  We also host many tournaments.  Second question is, ‘Is there value?’ I think the value is again for the fans.  All those people that come to town, they spend their money at our businesses.”

Councilman Mike Geraets thought another project should be done first before replacing the grandstand.  “There are some repairs that need to be done (to the grandstand).  But it’s still useable to me.  It looks like we need to update our comfort station, and we have the ability to do that now that we have the sewer across the river.”

City Administrator Justin Weiland mentioned to the council that the grandstand has been brought up to the city by the insurance company for the last nine to ten years.  Recommendations were made to do a structural report on the grandstand dating back to 2006.

Seating capacity for the new grandstand would be estimated at around 175 with four handicap accessible spots in the front.  The current grandstand currently is estimated to hold 250 people including the north stand.

“We are talking about replacing just the main section of the grandstand, not the north/south piece.  That can go away until we have a future need, and I don’t think we will see that for a while,” said Clarence Fjellanger.

DRBA board member LeAnn Kerzman added, “One little thing to consider too, we used to take a stipend for the DRBA, and we quit doing that a few years ago.  And that’s when we started doing the improvements in the rest of the parks…We did give up our annual request in order to see budget improvements to the park capital assets.”

Sommerfeld motioned to put the Rickeman Field grandstand project out for bid.  Mary Klockman seconded the motion.  The motion passed by a vote of 6-1.